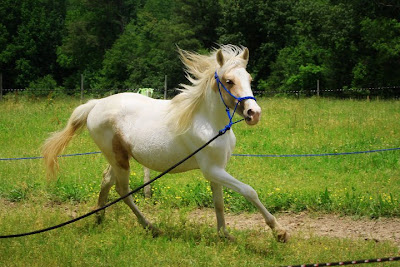 Yesterday I completed the easiest four hour ride that I have ever done. I was riding Tradewind on a lengthy exploration of some woods trails that I had never been on. This morning I discovered why the ride was so easy for both of us.

Beth fired up the wii machine and I weighed myself. Since late winter I have lost just over 20 lbs. I have been eating a diet centered on the principles of the Paleo diet.I have been riding steady but not to the point of regular exhaustion. I have been alternating round sole striding shoes and barefoot running, while beefing up core training with emphasis on the kettle bell.

I must admit that I am a bit excited about the prospect. And speaking of prospects, this is Werowance pictured above. This half Corolla colt is the son of Croatoan. His mother is a quarter horse/Tenn Walker cross. He turns two this summer. He is very warm and affectionate and has Croatoan's personality. He can really become a great horse. He will likely top out about 14 hands. He is 13.2 now. He has taken a saddle, is halter trained, and has had his hooves trimmed. He is one of only two 1/2 Corollas that I have left for sale. The other is Legacy and I am not sure that I want to sell Legacy.
Posted by Steve Edwards