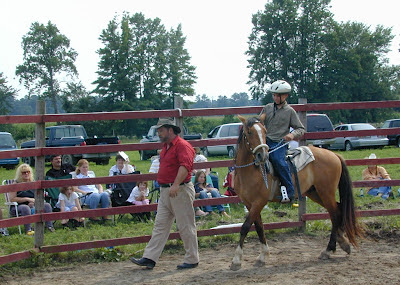 A city person was out at the horse lot one day while I was digging fence posts. (Post holes are dug for a mile and a quarter of fence.) He asked where my mechanical post hole digger was. I told him that I have never owned such a thing. "You're not going to tell me that you and your father dug all these post holes with your own two hands are you?," he asked. "No," I explained, "Lido dug a lot of them and he only had one hand he could use." (Here is Lido when he was about 12 years old on Sand Creek at the second training clinic that we ever did)
Posted by Steve Edwards No comments: 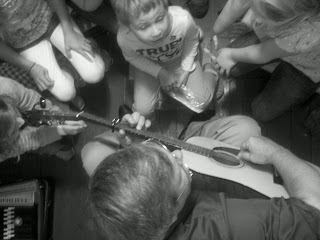 The most difficult part of running this program is something that no one else ever sees. It is not the care of the animals, or the teaching of the kids. It is the requirement to live in my role every minute of every day.

I have very strong beliefs as to the value of belief. I do not hold these beliefs as something to aspire to. I hold them as something to be lived without fail. If my little riders do not learn these values from me then I have failed, regardless of how well they ride or train wild horses.

Perhaps at the forefront of values that matter to me is generosity. I only feel justified in working to acquire something if it will put me in a better position to give away more. Absolute honesty is paramount. Sobriety must be practiced without a moment of giving into temptation. Hard work is reminder that one is still alive. Hard physical work is a reminder that one has been blessed to be able to do that hard work. Without a degree of courage all other virtues are hollow. One cannot live a value filled life without having the courage to reject the values of the rest of the world. I try to teach a love of learning and an appreciation of meaningful art, particularly music that has stood the test of time.

When Lido died I got a note from an acquaintance to the effect that I have worked to teach my little riders about life, now I must teach them about death. I doubt if I did a good job at that. Some holes in a wall can never be covered with Spackle.

But perhaps I am succeeding in teaching perseverance. Learning to ignore discomfort and pain makes it possible to to persevere. Lest one preservers one cannot practice any of the the other virtues that I hold dear.
Posted by Steve Edwards 1 comment: 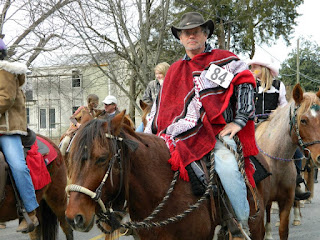 He is over 20 years old. He lost his eye when he was a less than a year old--not lost his sight in one eye--lost his entire eye--just a hole there. He doesn't care. I don't either.

He is scarred from years of fighting--usually won--not as often in recent years as he did when he was younger. He adjusts. So do I.

I met him in 2007 during the HOA inspection tour of the wild herds of Corolla and Shackleford. It was late in his career as Emperor of Corova Beach. He had worked at the job for years--whipping young studs that sought to take his harem--looking for a bit of sea oats and scrub to eat--avoiding the flies and the tourists of summer. For the past few years he took to spending his winters across the line in Virginia away from the young studs. This summer he even still had a few mares with him.

A young stud put an end to his years in the wild--bit the eyelid nearly off of his one eye. He had to be captured to be treated. So there he was--an ancient wild stallion, missing one eye, injured in the other, a nagging flesh wound to his hock. He retired to pasture number 1 here in my horse lot.

Neither he nor I know everything, but we both now how it is. We both know the answers to the questions that people never ask. Neither of us are what we used to be, but both of us are enough. He writes better lyrics than I do. Here is what he thinks about the matter:

One eye is a plenty when you ain't got any reason to go and run and hide.
I can see with my heart.
I can feel with my soul.
I'll live forever cause I refuse to die.

I been here five hundred years Though it seems like yesterday
When they put me on a ship And brought me here from Spain
Riding in a canvas sling, three feet above the deck
Some of us trotted into port, some swam in from wrecks

I hauled in your nets
I drug out your boats
Plowed in your fields, even herded up your goats
Now all this sand's still here, can't you leave some room for me
You can go and build that cottage down in Myrtle Beach

Wading in the ocean
Sleeping in the sand
Eating tender marsh grass Drinking from the Sound
Got a lot of yesterday, ain't got much of now
'Spect I'll have a tomorrow, but I just don't know how.

(This is Tradewind pictured above. The old one eyed stallion will be posing for pictures shortly.)
Posted by Steve Edwards No comments:

Mill Swamp Indian Horse Views: The Whole Truth and Nothing But the Truth

Mill Swamp Indian Horse Views: The Whole Truth and Nothing But the Truth: There is no advantage to lie to a rough horse in the round pen. When one stands alone with a wild horse that could, if it chose to, kill ...

Mill Swamp Indian Horse Views: Quick Tip #3: Calcium deficiency is a real problem for horses. Many other "deficiencies" are merely real opportunities for those that make supplements...

But On The Other Hand... 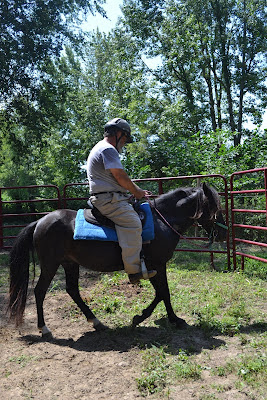 There was one advantage of being sick for so long. While I had little energy to train, I also had little incentive to be concerned about getting injured. I have not been comfortable hopping on an untrained horse to give him his earliest rides for a reason that few people can understand. While not pleasant, breaking a few ribs is no big deal. Toting water, rolling hay, digging fence posts with broken ribs are all very big deals. In short, getting injured is not the problem. Having to continue to run our operation while injured is precisely the problem. Over the summer I came to realize that no matter how sick I was, the horses still got taken care of one way or another. I really did not have much too lose. Edward Teach is the prime beneficiary of my summer of convalescence. His training had come to a stalling point. Months earlier, Abby had ridden him bareback in the woods twice. The fact that Abby can ride a horse is not a testimonial to the horse's training. Abby can ride a horse be he trained or not. Even Red Feather has never been able to toss Abby.

Like all old men faced with a problem, I went back to looking at what used to work. I applied the same boring principles of natural horsemanship that Rebecca and I used successfully on other wild horses. I worked him the way that Lido and I used to work horses. I worked him without stopping to ask what big name clinicians would do. I worked using what horses have taught me instead of worrying about what clinicians have tried to sell me. And what I worked with him worked. I rode him in the woods several times--he never resisted--he never flinched--he showed no fear and he gave no pain. My initial encounters with this young, severely injured wild stallion had been intense. When he came to us he had a wound in his neck large enough to put a baby's face into it. He showed hints of having a touch of Red Feather in his heart. It turns out that he is as tractable as Croatoan.

He has one son so far, Ashley's colt, Peter Maxwell. Peter is 1/2 Corolla. His mother Quien Es? is a Chincoteague BLM cross. We will train Peter the same way that I worked his father with complete allegiance to the horse and with no concern for anything else.
Posted by Steve Edwards No comments:

Mill Swamp Indian Horse Views: A Peculiar Post--Perhaps Helpful: (What is set out below is not a normal blog post. It is from a note that I sent out to the parents of my riders last week. In the note I ...

The End of The Beginning

I am feeling better. Over the past week I have been in the saddle more than I have for a very long time. Sunday I was shocked to see how long it had been since I have ridden hard. I rode from the horse lot to my home through the woods. The trail had completely grown up in some spots and there was not hint that a trail had ever existed. For the past decade the horse's hooves have kept the trail open. It will be open again soon. This blog will also be making a comeback.
Posted by Steve Edwards 2 comments: