Pictures From the Big Ride 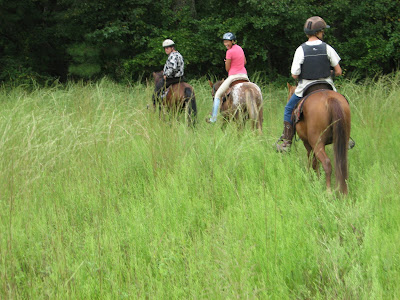 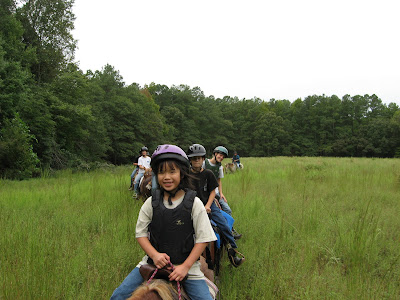 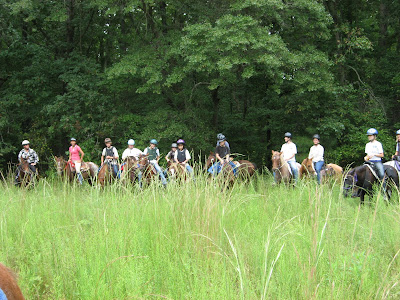 These are a few shots from Saturday. For an explanation see the previous post.
Posted by Steve Edwards 3 comments: 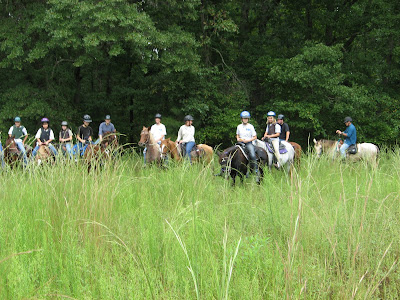 The morning after the funeral I realized that I needed a big project to plan so that that planning could provide a distraction from the pain of simply being awake. My first mention of my project did not go well. The first rider that I told about my plans for a 100 mile ride promptly told me that she would not commit to it.

Since then, many of my riders and parents have been firmly committed to this project. We conditioned horses throughout the spring and summer. Initially I had planned to spread the 100 miles out over three days but as my riders and their horses became conditioned, I realized that that would not be a challenge. I decided to do 50 miles on Saturday and 50 on Sunday. We chose the last weekend in September for the challenge.

My pastures are surrounded by miles of woods and swamp. Trails, some new, some hundreds of years old lace through the woods. In order to prevent errors from estimating the distances I acquired a GPS.

Saturday we did fifty miles. It has been a very wet week around here and Saturday night we had another deluge. On Sunday morning we rode in light rain and the horses plodded through mud and muck for long sections of the trails. After eight of us completed 25 miles on Sunday I ended the ride. The horses all could have easily done 25 more miles but the rain and wet saddles exacerbated saddle sores and began to threaten what I hoped would be a positive memory for my little riders.

Saturday we started out with 16 riders. Eight of them knew from the beginning that they would not be out for the Sunday ride as a result primarily of church commitments.

Seventy five miles, one purely domestic horse, many 1/2 Chincoteagues,a Shackleford, four or five Corollas with the rest being BLM mustangs. The youngest rider was nine years old and the oldest rider was older than I am.

Sunday afternoon I think some of my riders mistook my exhaustion for disappointment and kept trying to cheer me up because we only did 75 miles instead of the one hundred that I had planned for. I was not disappointed.

But who am I too brag? I am sure that any educated horseman from the established horse world would have done a much better job with this project! After all, Milburn Drysdale was so much smarter than Jed Clampett.
Posted by Steve Edwards 1 comment: 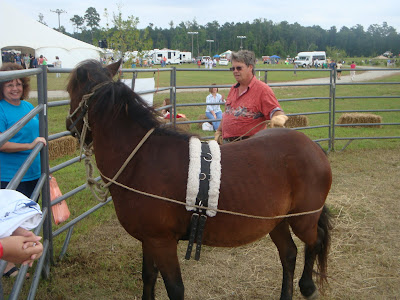 We spent four days last week at the Isle of Wight Fair demonstrating how we tame and train the Corollas. The fair was well attended, over 20,000 visitors. My riders were great in the demonstrations. Emily Marble, Jacob, and Wendy rode Red Feather for the crowd. Best of all, Wendy stayed on when he began to buck and softly brought him down.

Most importantly, at this fair Red Feather learned to be comfortable with something touching his back legs. This was a huge step for this horse who could never be tamed.
Posted by Steve Edwards No comments: 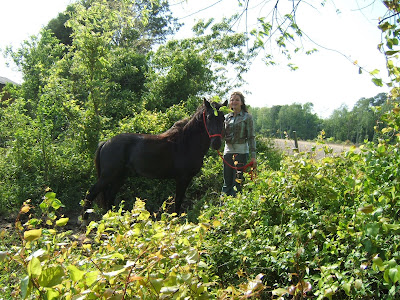 KC does. He has only been riding for about two months but from the first day he worked to overcome his natural fears in order to become a natural horseman.

Saturday he will ride a formerly wild horse on a fifty mile ride. I have not decided which one he will be riding yet, but Manteo, featured above, may have the day open.
Posted by Steve Edwards No comments:

Lab Results Are In 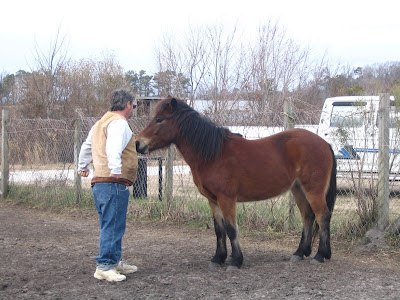 As indicated in the previous post, Holland and I did an experiment Friday. We set out to see what we were made of.

Holland was absolutely impeccable. He carried 220 lbs forty miles with about 35-38 of those miles at a trot and averaged 5.5 mph. I have no idea how many more miles he could have done. Yesterday I rode him ten miles and he was as fresh as a daisy. He opened up into a 9 mph trot any time I asked him.

I, on the other hand, was peccable. I was working through the saddle sores pretty well when at mile 40 I simply hit the wall. I believe that it was entirely the result of not following through with my nutritional plan. I purchased two large Domino's combination pizza's and only ate one of them.

In all I rode 72 miles this weekend. Now I know that that is not much for you young endurance athletes, but for an aged,arthritic, over weight man who has only a few more teeth than the average rooster, I thought that it was pretty good.

(This is a picture of Holland the first time that I met him).
Posted by Steve Edwards 3 comments: 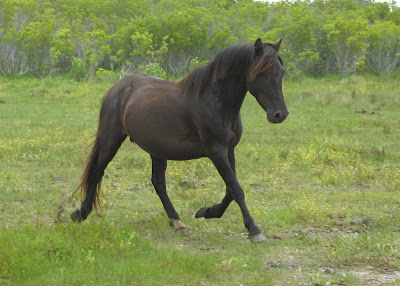 Tomorrow morning, just before sunrise, I will slip off into our densely wooded laboratory for a bit of intense research and experimentation. The purpose is to discover the answer to two vexing questions--"Is Holland too small?" and "Am I too old?"


(The wild Corolla stallion pictured above is, without a doubt, young enough and big enough.)
Posted by Steve Edwards 3 comments:

Getting Through The Firsts 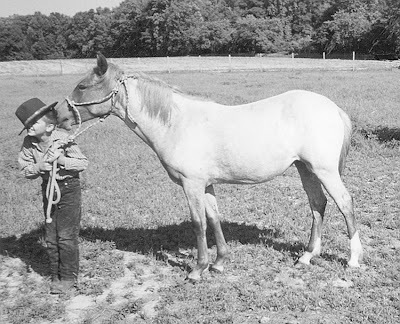 I went to the tack auction a few months ago without Lido. It was the first time that I had ever been there without Lido. I had some of my little riders with me so it was not too bad.

The Isle of Wight Fair is coming up in about 10 days. This will be the first fair they have had since they started having them again several years ago in which Lido will not be competing in the 4-H livestock contests. I will be doing a series of horse taming clinics at the fair but I will have a lot of my little riders with me so I expect that it will not be too bad.

The Virginia State Fair will follow the county fair. This will be the first state fair in a decade in which Lido has not shown prize winning milk goats. I will not be at the state fair so I expect that it will not be too bad.

Today was the first day of school. It was raining and over cast. When I went to feed up I approached Lido's bus stop at the same time the bus did. For a fraction of a moment, the driver slowed down, but there was no one there to be picked up. I was alone in my vehicle and had no little riders with me. Because school had started, they could no longer come out for the 7:00 am conditioning rides. I was alone and it was bad, very bad.

(This is Lido when he was about 10 with a mustang filly, Stardust. Within minutes of the first time she ever had a saddle or hackamore on her she carried Lido into the woods without hesitating. He smiled and said, "Done busted me another mustang.")
Posted by Steve Edwards 2 comments:

Killers of the Dream 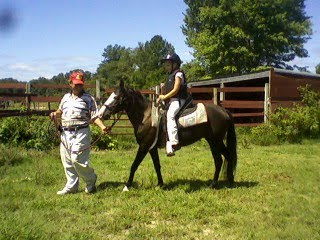 Decisions being made by local governments across the nation are proving the deathnell of the dreams of prospective horse owners. Most such decisions are made with no malice and very little thought.

Over twenty thousand mustangs sit in government holding facilities because they lack adoptive homes. Horse prices have plummented leading to the belief that we have a surplus of horses. Some even advocate horse slaughter as a humane way to restore the economic balance in the horse industry.

The other side of the equation is that many kids today,and especially boys, lead shallow, vaccous lives. They often have never touched a horse. They do not even have any idea how badly they need to touch horses. And those are the kids without educational or emotional disabilites. Kids with such complications often find interaction with horses to be life altering experiences.

It is impossible to work with kids and horses for five years without running into many cases of kids whose futures were saved, whose lives were given meaning, and whose parents were given hope simply by having the opportunity to work and ride horses.

Anything that stands between the ability of a child at risk for serious subastance abuse is not merely poor public policy. It is patently immoral. What cold and malevalent heart would support policies that would make it more difficult for the parents of a child with autism to acquire a horse? What misanthrope would support policies that make it more difficult for an anxiety ridden, depressed teen to have access to the horse that might literally preserve the child's life? (Oh that someone would do a study on teen suicide rates among kids who are activly invovled with horses!)

Few local officals would knowingly ever make such a decision. The problem is that every ordinance, regualtion or statute, that increases the cost of horse ownership does exactly that. Overly restrictive acerage requirements are perhaps the worst example of such policies. Concerns that a future neighbor might complain of barn yard smells are a close second. Fencing requirements that focus only on costly aethetics are equally bad.

It is patently immoral for government to adopt policies that create a system that makes it impossible for working families to afford horses.

Even those of us in such families are amazed at the impact horses can make in kid's lives and it is unfair for us to expect governmental officals with no equine experience to understand without being educated by those of us who understand.

And let's not forget what horses can do for happy, emotionally healthy children. I state no heresy when I say that horses, "give them life that they may have it more aboundantly." No heresy, merely a fact.

The picture above is of a very happy little girl with her new horse that will make her life even better.
Posted by Steve Edwards 1 comment: