Dorothy, I'm Afraid That We are In Kansas, Again! 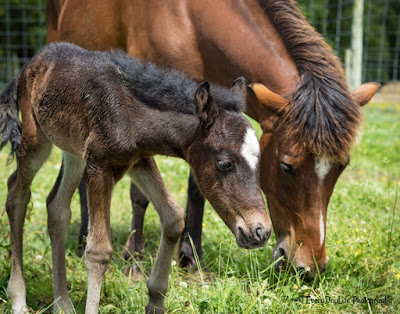 But it is the Kansas of the 1850's.
The Civil War officially began with the firing on Fort Sumpter. In reality, it began with the years of bloody civil war in Kansas as agents of what Lincoln referred to as "The Slave Power" fought abolitionists over whether slavery was to be allowed in the state.
Nearly two years ago it occurred to me that the incredible divisiveness that I saw in the nation could lead to massive violence. I set the the thought aside as being merely one of thousands of scary thoughts that  that take brief possession of my thoughts.
Two weeks from today an election will occur and it is impossible to imagine that we will be closer as a people after that day than we are now.
But healing is what we must do and in order to heal we will need to change hearts more than minds. We will need to strengthen institutions that draw us together, not merely as Americans, but as human beings.
Only the handful of people who have seen such programs in action will understand what I suggest, but one of the most important steps that we can take for long term healing is to create more programs that draw young people from every race and economic back ground back to the soil.
Descartes was correct on the individual level when he declared, "I think, therefore I am", but on a collective level it is equally important that we understand as humans, "We farm, therefore we are."
When we reach back into the finest traditions of the past and apply the African concept of sankofa (bringing forward the very best of the old ways and placing them in our present and our future) we create common ground. We create healing. We create understanding. We create empathy.
We will need to build a nation in which every youth program becomes a diverse youth program. Never separate but equal, always unified and equal. and always seeking to bring about learning experiences that draw us back to our shared human experience of being one with the soil--the soil  from which we all  came and from which we will all return.
When I was younger I practiced and promoted natural horsemanship to benefit horses. Ashley Edwards taught  me that people benefit more from the practice of natural horsemanship than do horses. The PTSD patients that I have worked with in the round pen for years taught me that the benefits of natural horsemanship can heal the deepest pain that humans experience.
Sankofa, understanding the best of who we were in order to become better than we are, can be a vital tool of healing. And I fear that this nation  we will need every tool possible to heal. Readers might not understand how teaching vermiculture, heritage livestock preservation, roots music, soil and water conservation, history, folk skills, and animal husbandry can be part of bringing a nation back together. I do not blame those readers. It is a difficult point for people, especially those who are generations from the soil, to understand.
Over the next few years it will be our job to demonstrate how it does so and to network with other programs to achieve sankofa.
Posted by Steve Edwards No comments:

Spin Off Lessons: The Side Effects of Our Program 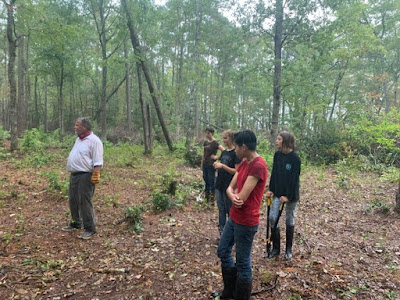 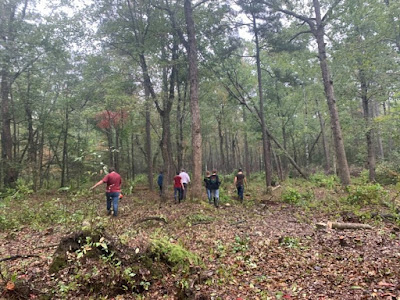 You learn to work. You learn to be proud of your work. You learn that you are not a weather man and that weather is irrelevant when there is work to be done. You learn to push yourself and you learn to enjoy investing time in a project that is bigger than are you.
We are turning about 15 acres of mature mixed woods forest into a pine and oak dominated silvopasture that will radically increase the forage and the living space that we will have for our livestock.
It was raining yesterday. We had a great turnout of program volunteers to cut down the small trees, all of the holly, all of the sourwood, nearly all of the gum and maple and all of the wild blueberry shrubs--leaving the largest pines and the oaks that produce acorns for the deer and squirrels. The limbs are being stacked into a brush pile that will likley be nearly 1/2 mile long when completed. This makes great habitat for quail and rabbits.
Some of the best poles will be taken from the woods, debarked, dried , treated with water repellant and used to build a riding ring. (We are looking seriously at getting into American Indian Horse Registry style shows in 2021)
The picture above is of most of the last hold outs that kept working through. The clearing that they are standing in was a fairly thick forest when the sun came up. Four or five chainsaws, a dozen or more hard working volunteers, and the only heavy equipment in use out there is me.
And we will be back at it again this weekend.
Posted by Steve Edwards No comments:

Casting Call: A Key to A Horse's Natural Health 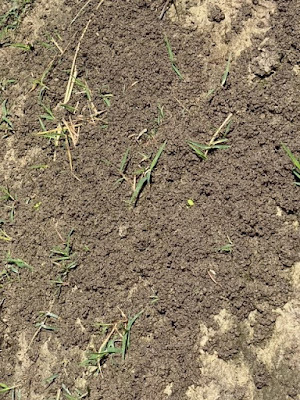 This is a picture of health, and a picture that too few people ever see. This is an overnight buildup of castings from red wiggler worms in one of the pastures close to our vermiculture operation.
The casting are as potent a soil amendment and organic growth agent as I know of. Our original vermicomposter is an old hot tub that is buried level with the ground so that it does not freeze in the winter.  Over the years we have added many tons of horse manure to fork fulls of old hay. We brought additional microbes in to the mixture by adding much smaller amounts of hog, rabbit, poultry, goat, cow and sheep manure.  We roll out round bales of hay over the pastures and that provides seed, a carbon cover to the soil,  and organic matter to the soil--all while the horses eat hay.
The largest vermicomoposter contains red wiggler composting worms. Over the years many thousands of them have left the container and became feral. The closer the pastures are to the composter the more dense they are in worms. The worms aerate and fertilize the soil. They also attract scores of one of my favorite wild birds, killdeer.
It is not just a matter of what we put into the soil. Equally important is what we do not put in the soil . There has not been any herbicide or pesticide on the soil in twenty years and there has been no commercial fertilizer on the soil in about ten years.
The super potent soil produces super nutritious grass, forbs, and weeds--everything that a horse needs to thrive.  It takes years of staying away from poison building up a solid microbial base to achieve this state. We are beginning the process on the new pastures that we are developing. and within a decade we will likely have nearly fifty acres of dark, living soil  supporting the nearly extinct Colonial Spanish horse strains that we work to preserve and promote.
Posted by Steve Edwards No comments: