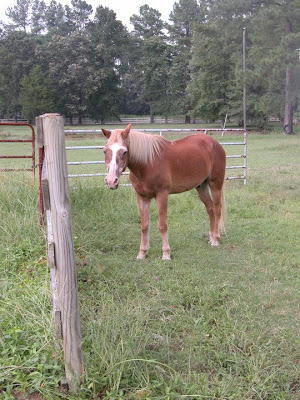 That was the simple advice that a very wise old man gave me after I was first elected to the county Board of Supervisors at age 27. By that he did not mean to do what was best for me. Instead he called on me to ignore my self interest anytime that it conflicted with righteousness. He recognized that public policy creation is an exercise in the demonstration of character that not only had a moral dimension, but instead tested one's morality daily.

Nothing special about politics in that regard. That is how all of life is.

The picture above is of Rusty. Rusty was an ancient pony in very poor health when he was delivered to my father. At the time I had a handful of mustangs and no plans to have any form of a horse program except to breed a colt or two a year, gentle them and sell them to cover the expenses of what was then a simple hobby.

Expecting to have two daughters in college at the same time in a few years, I was always concerned about expenses. Rusty was not my responsibility. There was no reason for me to work to rehabilitate him. It certainly did not appear to be in my self interest to do so. The only reason to work to put this very old pony back together was that by doing so I would be doing that which is right.

I spent a fortune on Rusty. I finally got him healthy and spry enough to seek a home for him. I advertised him for sale for a a fraction of what it had cost me to make him into a happy pony. I got a call from a family that had a little girl that had always wanted a pony. They purchased Rusty. He was their first horse. There were several kids in this family and they spent hours every day riding, brushing, feeding and simply being with Rusty. It would have been hard to find a happier pony in Virginia. The family went to a church in Norfolk that was filled with city kids. Many of those kids would come out to the country to spend Saturdays with Rusty. He developed quite a fan base. And yes, he did live happily ever after.

Thee was no business logic behind my decision. On paper it was a poor business move. But life is not lived on paper.

Here is the direct result of deciding to put the old horse back together. Here is the return on my investment.

The family that purchased the Rusty, the Marbles, have had a greater positive influence on my life than any family of which I have ever come into contact. The girls are now all three great riders and first rate horse trainers. Priscilla has become one of the best trainers that I have ever seen and can articulate Parelli's theories as well as he can. Not bad for a kid who until relatively recently could order off of the children's menu. They have each gentled and trained difficult horses on their own.

Lydia and Rebecca ended up at my horse lot because of connections that they had directly or indirectly with the Marbles. They are now not only first rate horse trainers, but are also two young ladies that I can depend on. (As one ages there are few things more important than having people that one can depend on. The first phone call that I made when I found out that Lido had died was to my wife. The second was to Rebecca. I told her what needed to be done while I made the long drive back home. I never wondered if it would be a problem. I knew that I could count on Rebecca.)

It would be a pretty bleak existence. I am one who finds that, in the words of A.P. Carter, "dark and stormy weather seems inclined to me." I rarely find myself in a position to say that life simply has its ups and downs. In all honesty, life seems to have its downs and its way, way downs.

If one does not have time to read the whole Bible just flick over to the end to see how things work out. Turns out that in the end, the good do win.
Posted by Steve Edwards

It's amazing how God has brought us all together.

This is one of my favorites of your insightful posts.

I also have found doing the right thing is usually the only thing. Quite by "accident" I have found my calling, my passion and happiness. I sleep well knowing I've helped children( iu13 local school) disabled adults programs, Veterans support and lots of volunteers and my family members. This we did bc we have a horse rescue and other great animal teachers. People aren't too bad either.