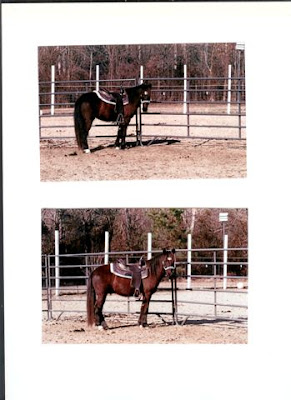 It seems that horses throughout history have been given the same social status that is accorded to their owner's class. When small Spanish stallions were ridden by the nobility they were considered to be the apex of equine breeding. Three hundred years later when they became the horses of former slaves and poor whites, they were viewed as trash in the southeast. People of color often preferred horses of color and that is all of the proof that northern Europeans needed that horses of color were inferior.

In the 1960's around here whites generally killed puppies born of the accidental mating of bird dogs and deer hounds. Such mixes were despised. (likely rooted in deep seated psycological fear of miscegenation.) The reason given was that such crosses were worthless for deer hunting. Indeed, it was a widely accepted "fact", as sure as that the sun rises in the east, that such dogs were crazy, impossible to handle, and did not bark enough on track to do anything except mess up a good pack of hounds.

In fact, many such crosses made great deer dogs. All one had to do was to look down the road to the homes of the black families in the community. They often kept such crosses and hunted them regularly. They often made first rate dogs. That did not matter to the white hunters. The "fact" that these dogs would not hunt deer overroad the observation of those crossed up dogs setting the woods on fire behind a deer day after day. Some of the more broad minded whites would opine that it appeared that some of these dogs would run deer, "but not for white people."

As integration progressed and we moved into the next decade more and more white farmers found that it was ok to have "just one or two" of the crossed up dogs in a pack. Today the "stigma" associated with such dogs is buried so far in the past that most of the young boys coming along cannot even look at a deer hound and tell that it has some of the crossed up ancestry. The only thing that matters is whether or not the dog will smoke a deer. --A triumph of reality over appearance.

Indian ponies were viewed as inferior because they were the horses of Indians. In other times and other places the proof that a pony should not be ridden by an adult was the fact that the Irish rode ponies. Even into my father's generation everyone 'knew' that mules were great but that hinnys were worthless, could never be trained and were of absolutely no value. What they did not know was that this silly belief, with no basis in reality, still existed in the 20th century in the rural south because there was once a time when the hinny was prized by Irish country people.

The same silliness, racism, and arrogance has been behind many of the efforts to "improve" the horses that are associated with poor folks any where in the world. The obsession with conformation and putting it ahead of performance to gauge horses is its trade mark. For such people it does not matter whether or not a horse is fast. The question is whether or not it carries the proper conformation that is associated with speed. Appearance trumps reality. But one constant remains true for such breeders and improvers through out history--Stupid is as Stupid does.
Posted by Steve Edwards

wish i could help

check out my blog though

I have heard/read the bit about hinnys being inferior to mules several times. I had no idea it was based in racism.

(For those who do not know me - I am of Steve's generation, not his father's.)

Here is a photo of an adult who doesn’t believe that ponies should not be ridden by an adult. That looks like a Fell Pony she is on. I did a little searching and found that she is a patron of the Fell Pony Society.

More browsing of British Pony breeds (which is why I am still not in bed) turned up this concerning the endangered Exmore Pony:

“A major recent development that has helped the breed has been the recognition that Exmoor ponies can be a useful conservation tool themselves. The National trust, English nature, and other county wildlife trusts have set up small, free living herds on sensitive nature reserves to manage the vegetation. The work has proven to be a success and has benefited the conservation of whole habitats alongside the conservation of the Exmoor breed.”

Yet those who would limit the Corolla ponies on Currituck claim that they are bad for the vegetation and habitat. Hmmm.