What is Natural About Natural Horsemanship? 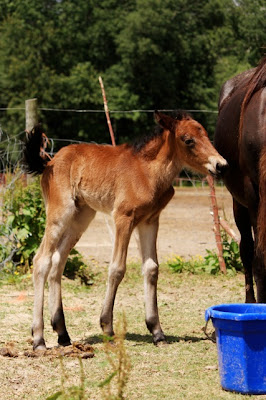 About 75 hours after Pasquenoke was born she was running beautiful circles around her mother who grazed peacefully. The circles were about 40 yards across and were nearly perfectly round. Yes, as round as a round pen.

When she deviated from the circle and took off in a straight line her mother would jerk her head up from the pasture and focus intently on the colt. The colt would quickly return to the circle route and the mother immediately returned to grazing. In short order Pasquenoke completely stopped deviating from the circle.

That is all natural horsemanship is--using communication techniques that horses naturally understand. In short, instead of seeking to teach them to speak English, we learn to speak horse.

Every method that seeks to refine this simple principle is a move away from natural horsemanship into something entirely different. It is very unfortunate that nonviolence has been distorted into being the key component of natural horsemanship. Nonviolence is a wonderful concept that I adhere to as a goal for human existence but it is utterly alien to the natural horse world. A great deal of the communication that occurs in the herd is based on dominance, violence and control.

Cruelty is not natural in the herd and it has no place in training. Violence does not, and should not, ever be equated with cruelty. Clinton Anderson phrases it nicely with his instruction to be "As firm as necessary, but as gentle as possible." Would that more horse people understand that firmness is not cruelty.

In training horses I do not seek to emulate Gandhi. Instead, I seek to emulate Comet, a long time leader of my herd. A young horse would not kick or bite Comet because he would nail them.

My horses nearly never demonstrate any violence toward me. That is because they know that, like Comet, I would nail them.

And I would nail them naturally.
Posted by Steve Edwards