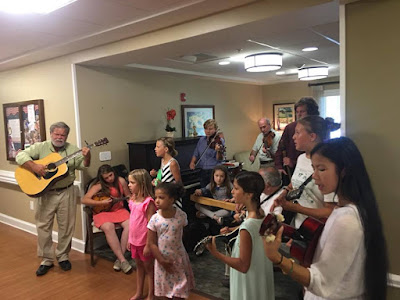 Our roots music educational program is growing steadily. Next to our riding program it is one of the most popular things that we do. Program participants learn to play a range of acoustic instruments and to perform a few modern songs, but our focus is on Carter Family, Old Time, blues, gospel, bluegrass and folk music. Students learn to play by ear--- no written music is used. This performance at a local nursing home does not include everyone in the program and the camera could not even take in all of the participants that were actually performing.

Dale Jett, A.P. and Sara Carter's grandson, said, "We went to bed of the night with the music and we woke up of the morning with the music." The great performer and ethnomusicologist, Mike Seeger believed that the first step to learning to play this music was to listen to it over and over, until your body absorbed the feel of the music.

In August I am taking an actual vacation and will be joined by everyone in our music program who can do so. My wife, Beth, has put together a great cultural and educational itinerary for the trip.  We will journey into southwest Virginia to see performances at Hungry Mother State Park, hope to take a tour of the Henderson School, attend the Carter Fold Festival which commemorates the anniversary of the 1927 Bristol Sessions Recordings by the Carter Family, visit the Heartwood, Southwest Virginia's artisan gallery and we will go into Bristol to see the Museum of the Birthplace of Country music. We will spend several days on this trip.

We will bring our instruments along and anytime there is a break in our schedule we will tune up on work on some songs.

All of this is part of what makes Mill Swamp Indian Horses such a different riding experience. We are a 501 (c) 5 non profit breed conservation program. We teach riding and natural horsemanship. We teach history and permaculture. WE heal and we teach others to heal. We fill voids.

The reality is that we are a cultural and educational facility--all with no paid staff. All with 100% volunteers.

There is no charge to participate in our musical program. No one has ever been turned away for lack of ability to pay program fees for our riding instruction program.

We have a very important fundraiser coming up on July 21. You don't have to be there to contribute. Go to our website www.millswampindianhorses.com to learn more about our program and to make a donation on line. Donations to a 501 (c) 5 non profit are not tax deductible. 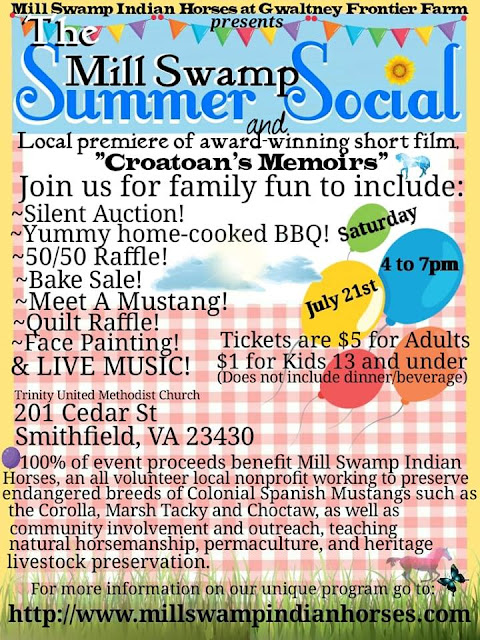 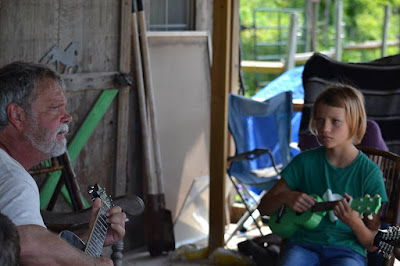 For years,  Vaugn Deel has put on first rate open mic shows here in Tidewater. At these performances I have watched some very hard working young musicians get better with each performance . Victorian Station in Hampton, provides the best venue for open mics that I have encountered.

There is truth in timeworn lyrics. "Farther Along" says more to many people about the root of good and evil  than can all the verses of Job, Ecclesiastes, and Habakkuk combined. Three verses of "Keep on the Sunny Side" boil down three years of counselling on fighting depression.   Several Steve Earle songs teach us that what was  still is, but that it does not have to be that way in the future.

But the lyrics must be heard to matter and Victorian Station is a place where they can be heard. At the moment Songwriter's night is the first Thursday night of each month and only original songs are performed. I hope that the future will bring back the weekly sessions that made Victorian Station  so special. 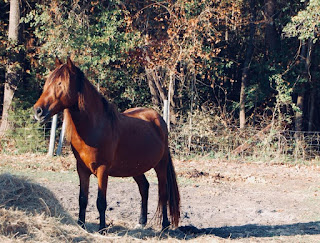 I understand that a double dose of fenbenzadole, for five consecutive days works as well for many horses as a single treatment of Quest. The price and convenience of Quest makes that an attractive option for our horses.
Posted by Steve Edwards No comments: 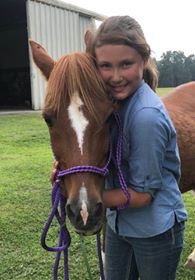 Beginning Saturday June 16, at 3:00pm, Mill Swamp Indian Horses, in Smithfield Virginia will offer a six session package introducing people of all ages to horseback riding. Unlike many other riding instruction programs, these sessions will begin with an introduction to natural horsemanship, providing participants with an understanding of a horse's physical and emotional needs. Understanding a horse's motivations is an essential step in developing a safe and humane relationship between horse and rider. 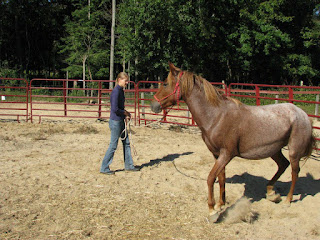 The next session, to be held the following Saturday from 3-5, will focus on understanding tack and how to properly saddle and unsaddle a horse. The remaining sessions will move into proper cues for our horses and the last session will include a group trail ride. Participants must be at least eight years old. Adults are encouraged to participate.

The fee for the entire six session program is only $175.00. Mill Swamp Indian Horses is a program of Gwaltney Frontier Farm, a 501 (c) 5 non profit breed conservation program. On site one will find some of the rarest strains of historic colonial horses left in the  nation, along with heritage breed goats, hogs, and turkeys. No herbicides or pesticides are used on the grounds and the pastures are developed using principles of permaculture  and microbial farming.

See more about our unique program at www.millswampindianhorses.com.

Register for the six session program by email to msindianhorses@aol.com.