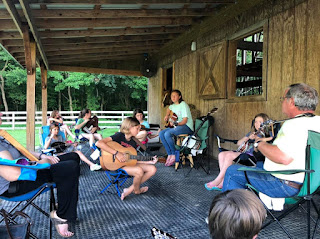 I guess that this is what it is like to wake up from a coma. Moving back into life is stranger than I imagined. Since the virus struck, this is the third time that we have attempted to get together to play music. The first two efforts were very sad. We were without a fiddler and we were so far apart that we could not hear each other enough to stitch the tunes together. 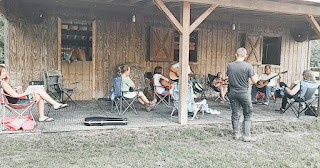 I was not looking forward to getting together last night. I had lost my recollection of how much I enjoyed playing music with the kids. But I got reminded last night. Chris had to work late so we missed his dobro, but the little girls have gotten older over the past six months and they song with much more power. We had a fiddler. the kids sounded good and they were having fun.

Grace Cofer was raised in England and during World War II flower gardens were replaced with vegetable gardens to feed the nation under Nazi assault. She told me that when the war was over the flowers seemed prettier than they seemed before the war. I hope that our war will end soon.

I am looking forward to listening to some beautiful flowers.
Posted by Steve Edwards