The Opposite Of Factory Farming 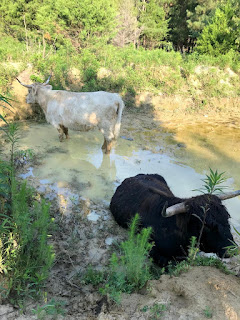 "What It Means" Patterson Hood


This is a trying time. It is also one of the most exciting times to be an American that we have ever had.  We are beginning to slice open the abscess that has crippled our nation from its beginning. As the infection pours away we have opportunities to finally build a more perfect union.

This is not a time for tinkering. It is a time to build a newer world. It is a time to reach back and find the positive values that have held us together over the past few hundred years and work to strengthen those values.

One of those values has been a connection to the soil. It gave us authenticity. It gave us pride in work. It gave us an appreciation of creation. It made us physically and spiritually stronger.

Modern agribusiness with its factory farming system destroys our authenticity. It radically decreased the number of farmers. It gives no appreciation of creation. It has made us physically and spiritually weaker.

We have a chance to build a world in which city kids and suburban kids can come together to learn to work the soil, and, most importantly, to work that soil together.

Does this sound too vague and amorphous? I understand if you can't understand what I mean. I would not be able to understand either, had I not observed the improvement in the quality of young people's lives that occurs when they put down the cell phone and pick up a shovel or a bridle.

The first step is to make it a national priority to expand agricultural education in our public schools. We must do so without allowing that education to become mere propaganda for agribusiness conglomerates.

The second step is to promote nontraditional educational opportunities though both non-profits and for profit businesses that will draw young people from the cities and suburbs out into the sunshine. It is this second step that I am working on at the moment.

One could suggest that  this is a horrible time to try to bring people together to patch up a broken world.

I could not agree more.

It is also the best time that we have ever had to work together to build a newer world.
Posted by Steve Edwards