What Is The Role Of Power In Program Management? 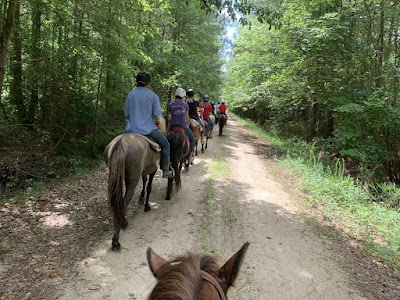 Certainly not what this picture might suggest to you. if this picture was all that one saw about our program it would give a very misleading picture. This view of power and leadership--one leader out in front, all other following, a pronounced lack of individuality on the part of the riders, is the perfect Leninist model of leadership and power. We ride this way for safety of the group and safety of individual riders and horses. We ride this way not because we are a group divided between leaders and followers.

Instead we ride this way because we are all gong in the same direction.

As little riders advance in their skills and confidence one of the first things that they want to do is to lead rides. Of course, they do not understand the responsibility that role carries. The leader of the ride can never day dream, no flights of fancy, no letting one's focus down for even a moment. The ride leader must be constantly focused on any potential safety issue ahead and must be listening out for any problem that might be developing behind them. 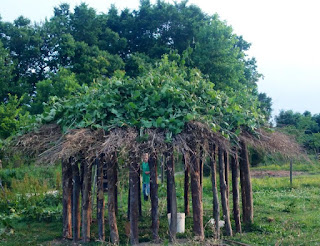 This picture represents how power is best demonstrated in the program. Mozelle Henry was the mother of Monique Henry. Monique first made us aware of the the incredible abilities of the Choctaw horses and presented us with our first Choctaw horses. Mozelle was coming to visit our program. We wanted to do something special to make the visit a bit more memorable for her. We built this modified version of of Choctaw summer home called a chickee just outside the pen where we kept the Choctaws.

Everyone who worked on this project was a volutneer,  no one forced or coerced into helping. The  reward for the hot work that went into building this summer home was to see a big smile and a surprised look on her face as she turned and said ,"You know my people used to make homes like this." 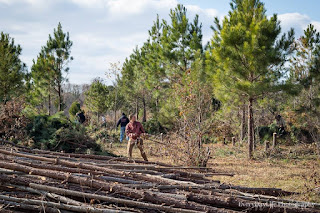 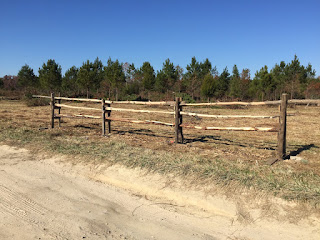 Take a look at these two pictures. My wife and I purchased app. 20 acres of what was once pasture and was over grown with 15 years worth of pine,cherry, mimosa, and sweet gum. It was projected to cost about $1500.00 per acre to clear the land. Fencing around it would carry an astronomical cost.

Instead we cleared the land with a few chainsaws, Wendell's brush buster, and many hours of labor from program participants with special effort put into land clearing by Matt and we got the job done. Each morning before going to the office I cut down trees for about an hour and did so for many months. When we began to build our pole fence nay sayers pointed out that it would not last forever.

I pointed out that the same could be said of my body but that does not cause me to refrain from squeezing all of the life that I can out of this body before it gives out. The fence lasted three years. The amount of forage that our livestock ate from that pasture during that three years, coupled with a micro grant from the Livestock Conservancy has now allowed us to fence in the cleared pasture and portions of silvopasture.

So what is the hierarchy of our program? How is it managed? How is power and authority allocated?

This is hard for many program participants to accept, but there is no power, as it is thought to in most settings, to be allocated.  Those who work the hardest are rewarded by being asked to do more. They have proven themselves and as a result are given an opportunity to prove themselves on a more difficult task. Those who have been around the program for a while know how rare it is for me to directly ask someone to do a project. Doing so is about the highest compliment that I can give to a program participant. It means that they have earned my trust and I know that I can count on them.

But it does not result in titles, rewards, or anything more than a thank you. Power is indirectly manifested in the amount of service that a program participant can perform.

The reward for great service is more responsibility. It is my role to set priorities. When I fail to do so the program suffers, often significantly. I hope to be able to set stronger priorities this winter as the program takes on new social responsibilities. It might require me to speak louder, but I hope that it only requires participants to listen better.

Last week a new visitor to our program said in a bit of a peevish tone, "When I got here I could not even tell who was in charge!"

I thanked her for that compliment and told her that is exactly the kind of projection of status that we are shooting for.