Power: Applying the Concept of Revolutionary Struggle To A Natural Horsemanship Program 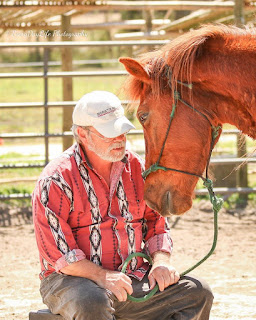 Things play out as they do. I wish that I had began our program years earlier. I wish that when I began our program I had as clear a vision of what it should be as I do now. I have been on a twenty year learning curve and I am now sixty years old. The program does, and will  continue to make radical differences in the lives of individuals but I doubt if, in my life time,  it will be emulated often enough by other programs to have the societal impact that could be found were it to become the norm instead of being unique.

I am an academic by design. I was in college the first time that I met a college professor. Had I grown up in an academic environment that surely would have been my profession. I had a double major at William and Mary---for studies in Religion and studies in government.

Like Harry Truman, I believe that every mistake made by humans today has been made before and that a solid enough study of history can equip us with the tools to understand how to solve those problems. In short, the key to a better future is a better understanding of the past.

It is the study of the mistakes, and successes, of the past that can best help us to understand how the concept of power must be understood in any endeavor that hopes to one day achieve revolutionary impact.

The established horse world is dependent on the belief that converting horses to cash is not only an acceptable use of the horse, but that it is the highest and best use of a horse. The rotten core of the established horse world was best summarized on the subject lines of one of the most memorable pieces of constructive criticism that our program ever received---"Quit Breeding Worthless Crap With No Marketable Value" was how the tome began.

By that standard a horse that I give to a child has no "value."  It's sales price was nothing so it's value was nothing. The fact that that horse prevented that child from committing suicide is not factored into it's "value."

Society, individuals, and horses can only reach their full potential if the hold that the established horse world has on all things equine is utterly broken and that system is replaced with one that recognizes the innate value of every horse and every human as a starting point in building a system of horse/human relations.

Our program has over sixty horses, some owned by the program, some owned by program participants, most owned by me. We have no paid staff. Everything that we do is done by volunteers. We have never turned anyone away for inability to pay program fees. We teach natural horsemanship, riding, conservation of nearly extinct strains of Colonial Spanish horses and other early colonial livestock. For over seven years we have provided weekly programming for those who are inpatient PTSD survivors at our local Veterans Hospital. We teach soil and water conservation and practice microbial pasture development. We teach history and cross cultural understanding. We teach music. We teach communication. We teach the use of horses in overcoming traumatic life experiences.

Some kids come to us imprisoned by anxiety, living in a world of fear, and who are incapable of expressing their feelings. Worst of all, they feel that they are not worth the effort of other's attention.

And some of these kids learn to tame and train wild horses, conduct clinics on doing so, become not only good horse trainers by the age of 14--they become good riding instructors by that age---and, many of them learn to play several instruments and perform on stage.

And none of this is brain surgery. Everything that we do can be done by horse owners across this nation.

And the hardest thing about keeping a program like ours alive is not money, or lack of volunteers--it is preventing conflict between program participants from hampering the goals of the program.

That requires a redefinition  of the concept of power and an understanding of that redefinition by program participants. And that very difficult issue will be the subject of the next post.