Saving The Colonial Spanish Horse: Waiting For The Day That Never Arrives 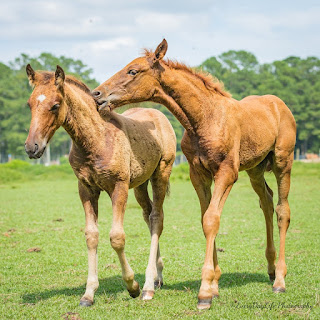 Of all of the different strains of Colonial Spanish Horse how many are left? Perhaps 2,500--more likely closer to 2,000. How many breeding stallions are left? 200-250 is my guess.

Here is the scarier question to ponder--what is the average age of the few preservationists that are left--and what is their average household income?

Their income is nearly as important as their age. One does not get rich preserving these horses. I will never forget the phrase that a breeder casually used years ago when describing the preservationists as people who "are willing to impoverish their families" for the horses.

Cold economic analysis would yield the verdict of death to these horses. In monetary terms, if the horses cannot be marketed for a profit sufficient to attract potential preservationists then their extinction is a fact waiting to happen.

The same could  be said of art, music, and folk culture. But we still have the songs of the mountains of southern Appalachia, the paintings of the great masters, and regional celebrations of folk culture because preservationist looked to enrich the lives of unborn generations instead of worrying about enriching their wallets.

We have the tools to preserve the horses that built this nation. We have the resources in strong registries like the Horse of The Americas Registry and the Spanish Mustang Registry. We have the technical support and networking opportunities that the Livestock Breeds Conservancy provides. Social media gives us a potential to collaborate and communicate in ways that Robert Brislawn could have never imagined when he began the effort to preserve these horses nearly ninety years ago.

But we have to act now. We can't continue to wait until our family circumstances and finances are perfect before making the leap into promoting and preserving these horses. For most of us that day will never come. The pool of breeders and the pool of breeding horses is on the downswing.

Of course, it would be outrageously irresponsible to seek to solve this crisis by merely increasing the supply of these horses. We have to increase the demand for them. For many decades promoters and preservationists have sought to build demand among the loudest demographic of horse owners--those who compete. A casual observer of the horse world might believe that competitors and horse show participants make up the majority of horse owners.

They do not. Most studies show that this demographic makes up less than a third of horse owners.

The established horse world is filled with those who have chosen a breed of horse and turned that breed into a brand of horse. They are  satisfied with the world that they have created for themselves and consider our horses too small, too narrow of chest and sloping of hip...etc...etc.

In short they have evaluated our horses and have come to the conclusion that they are not Quarter horses, Warm Bloods, Arabians, or Thoroughbreds and as such they are without "value."

But most of all, it is the child who does not know how to ride that we must reach out to. Nothing helps preserve the Colonial Spanish horse as much as teaching a child to ride one.

And we must have horses to offer them. And...those horses must be trained to a level that fits each purchaser.

Yes , but he is s STALLION , and everyone knows that a STALLION can never be made safe!

Turns out, that like so many other horses, his father is also a stallion. His name is Corn Stalk. He was captured at Corolla because of a tendency to get into automobile traffic. He arrived at our horse lot on a Wednesday. On Friday he took a saddle without incident. On Saturday he took his first rider. He has never bucked nor reared. He is often ridden in groups deep in the woods with several mares and there has never been a problem with them.

Our horses bring so much to the table--history, endurance smooth gaits, strong desires to bond with people--but for the rider of the 21st century perhaps the most important thing that they bring is their temperament. I will never forget the offhand comment, made with no hint of irony, that one family got into raising Colonial Spanish horses because they "were going to be having children and got out of the Arabian breed because {they} needed something safe, like a Spanish mustang."

Those of us who raise Colonial Spanish horses understand exactly what she meant. 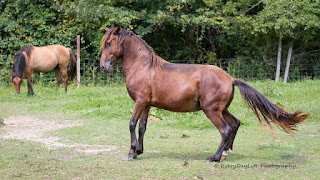 Here is a picture of Corn Stalk. Mingo, his paddock mate in the back ground, is a Marsh Tacky stallion.  If you want to be part of enriching the lives of generations to be born after you are gone, contact ms as msindianhorses@aol.com to discuss becoming a breeder of these historic horses.