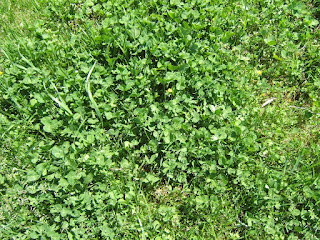 There remains a fortune to be made from those who are willing to settle for a second rate product provided that it is expensive and "is the way everyone does it."

In each case there are better ways to deal with the problem. The first step is in understanding that one rarely has a pasture problem without having a soil problem. If you want to see better grass above ground create an environment that produces more worms, fungi, and bacteria below ground. That means breaking up soil compaction, eliminating chemical poisons from the horse lot,and getting soil nutrients in, and on, the soil.

Killdeer inhabit healthy soils here in Tidewater. They have to. Healthy soils produce a lot of bugs and worms. There was a time when my pastures were over run with killdeer. In recent years they have become less common. That is an indicator of poor soil health and a sign that I have work to do.

We recently purchased nearly twenty acres of what was once pasture that has grown up in pine, mimosa, ash, and sweet gum. It has been nearly twenty years since it was lush pasture of fescue, alfalfa and clover. The mimosas took over perhaps as much as four acres of that land. They died out as the gums and ashes grew taller and shaded them to death. Perhaps a hundred remained.

The land was flush with rabbits, year after year. The ground vegetation around the mimosa trees was particularly vibrant and always carried the look of being heavily fertilized. The land is high in that area and the soil is sandy.

It always felt strange to walk among those mimosas. The ground was soft, light, and spongy. The strangest things were the wood cocks. Wood cocks are not plentiful in our area, especially in high sandy areas. The mimosa forest was a nursery for wood cocks, producing by far the greatest density of wood cooks that I have ever seen in Tidewater.

I often wondered about the cause of that population density.

I did not know that mimosas were legumes. I did not know that for all of those years they were fixing nitrogen in the soil. I never thought about the tremendous amount of nutrients that enter the soil as their leaves decay. Those conditions created perfect incubators for beneficial microbes and worms flourished as they consumed the microbes and it was this worm plantation that fed so many wood cocks.

The wood cocks have let me know where the best soil is on the new land. Now my job, over the remainder of my lifetime, is to use permaculture techniques to make the remainder of the land to be used as pasture as healthy as the former mimosa groves.

These techniques require less money than modern chemical farming. With that savings goes the requirement of more work. For anyone who has more time than money the preferred alternative is obvious.

But for anyone who cares about passing on a better environment to our great grandchildren, the preferred alternative is equally obvious.
Posted by Steve Edwards

You're on a roll! More wisdom. The soil is the literal foundation of whatever is on it.