If You Want To Preserve Heritage Livestock and Horses You Must 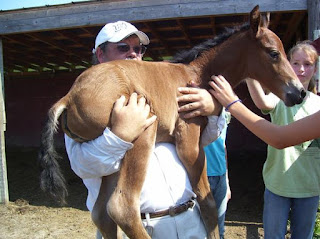 ...learn some important lessons and it is best to understand them from the beginning.

2. Don't expect to get rich off of your hard work. In fact, you should expect to loose a fortune. If you are thinking about doing this to get rich, look elsewhere. This is a calling, a service to future generations, not a way to pad one's bank account.

3. Don't expect to be immortal. You are going to die and when you do it is important to know that you have created a fire in others to take up where you left off, both in the broader sense of willingness to carry on  the fight for preservation but in the the narrow sense of knowing, with certainty, who is going to feed the animals the morning after the funeral.

4. Don't begin this endeavor if you are a restless soul whose life has involved drifting from one thing to the next. It is easy to acquire a herd on a whim. it is nearly impossible to sell a herd on a whim.

5. Don't take on this task if you do not know who you are. If you crave the approval of everyone around you take on another venture. This is not a task for those who the wind blows from here to there. It is not even a task for those who are willing to sail into the wind. This is a job for people who realize that there will be times when they will simply have to cause the wind to blow all by themselves.

6. Don't take on this task if you think that you matter more than the preservation of the animals. If you are looking for fame, recognition and appreciation for your efforts at preservation your ego will cause you to be nothing but an impediment to preservationists who are trying to get the job done for the right reasons.

7. Don't be afraid to highlight the differences between the animals that you seek to preserve and other animals, but don't be a schismatic trouble maker who is as driven to prove the inferiority of other strains as you are to demonstrate the virtues of your strain of livestock or poultry.

8. Don't be divisive. There are only a handful of serious preservationists in this nation. They already have enough to do without having to work to put out the fires that you would create among them.

9. Don't be blind to math. No one should understand the importance of numbers more than a rare breeds preservationist. We need to increase our numbers, work together and become part of larger groups. Any fool can split off and go fail on their own. It takes wisdom to build coalitions and to work with others.

10. Don't get on social media when you are angry, misinformed or half informed. The computer is both our greatest tool to promote preservation and the greatest threat that we have to cooperative preservation.

Have a goal that matters to you without being centered on you. It is best if that goal can be achieved in dark anonymity.

My goal is simple.

If 500 years from now some of the dust that a little girl brushes from the mane of her Colonial Spanish horse, of whatever strain, contains just a minute bit of my ashes, then it will all have been worth it.
Posted by Steve Edwards

There is a lot of wisdom here.