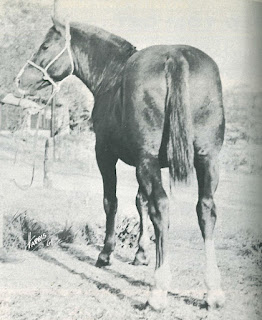 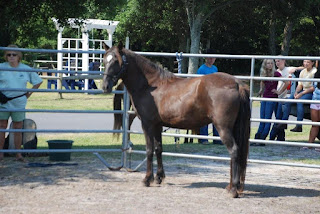 The original Chickasaw horse probably shared its over all looks with Choctaw, Cherokee and other tribal horses of the Southeast. I suspect that  white settlers along the Tidewater regions of the southeast made no tribal distinctions when they labeled these horses. From the limited written record it appears that "Chickasaw" was a widely used term for the Colonial Spanish Horses owned by various tribes.

Regardless of the actual provenience of these horses, they certainly were a key component in the development of what eventually became known as the Quarter Horse. However, I strongly doubt that they looked as much like modern quarter horses as does the stallion pictured above.

Swimmer, shown in the bottom piture, is a pure Corolla mare. She is the tallest wild mare I have ever personally seen. In her great book, "Wild Horse Dilemma", Bonnie Gruenberg cites her as an example of the "Chickasaw" type lineage that was brought into the Outer Banks during the late Colonial and early Federal period.

I have to agree. The stallion shown shows a radically different phenotype than other known Colonial Spanish horses of the southeast. I currently have her in a pasture with two Marsh Tacky mares. One would be hard pressed to pick the Corolla out among the three of them. She could pass equally well for a Choctaw.

(Duane White sent me a link to the article in an old Western Horseman magazine that contained this great picture of the stallion. http://www.westernhorseman.com/article/flashbacks/3102-the-chickasaw-horse. I love receiving old articles and pictures like this. When you come across one send it over.)
Posted by Steve Edwards