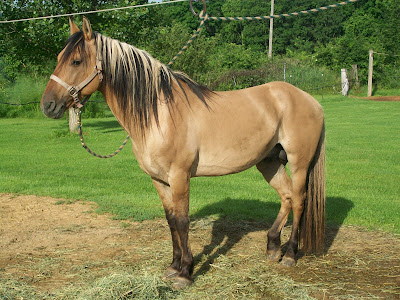 How different my life would have been if I knew more about horse's when I went to my first BLM mustang auction. They were advertising rare and historic mustangs called Sulphurs that were eligible for adoption. When I saw the Sulphurs that were there I considered them too small, (13 hands maybe) and too old (7 years old) for me to possibly have any use for. How wrong I was!

Sulphurs are also among the rarest and oldest strains of Spanish Colonial Horses left around. They share much history with the horses of the Outer Banks of North Carolina, though they come from the west. I understand that they are not gaited but have particularly smooth gaits. They are beautiful and they are nearly gone.

Those interested in preserving the Corollas can learn from what is happening with the Sulphurs. But for the work of a handful of owners of these horses adopted from the BLM, they would all be lost to history in a few short years. These owners and the network that they have developed are all that staves off the extinction of this strain. The strain will survive only as long as these owners can continue to work together.

These horse's have a special place in the history of California just as the Bankers do for those of us in the coastal southeast. But for this stallion's color, he has much in common with a Corolla's appearance. Note his rafter hips and high spine. That is what a Spanish mustang should look like. Those attributes, coupled with narrow chests, short backs, heavy bone, and round cannon bones are a big part of the package that produces a horse with unparalleled endurance.

Whether one lives on the Pacific coast or Atlantic City, one must recognize that these nearly extinct strains of Colonial Spanish horses are part of all of our history. Those who care about Corollas should support the work of the handful of people who are striving to preserve the Sulphurs. Corolla protection should be vitally important to Sulphur owners. We all have to support the efforts to preserve the Choctaw strains. We are all in this together.

The only thing worse for the future of these horses than having their proponents divided against each other is.....well, actually, nothing is worse.

Maybe it's just the color, but if this horse's neck and head profile were a little bit straighter, and had light eyes, he would look just like Rolling Thunder!

Agreed, but the things that differ between him and Rolling Thunder are the result of the non Spanish blood in her.

Great write up Steve. These are amazing horses and we are happy that we have foundation SHR offspring here at HI-5 Ranch. Our horses go back to the very first horses in the SHR, which is the original Registry for Sulphuir Horses. At the time they were discovered and for a period of years I believe the BLM adopted out some of the very best horses to build and maintain a Genetic Pool outside of the HMA. That is why the SHR was founded in 1998.

I forgot to mention, that Dragon is by a foundation stallion also. His sire was owned by the BLM and trained by a BLM field officeMGR. A Wild Horse Specialist and then sold trained. Duane can come on and tell who Dragon's sire is and more of the story. I believe that Dragon's dam was also A foundation Mare.
By Foundation I am referring to some of the very first horses adopted out or kept by the BLM in the late 80"s and the 90's.

Yes Dragon's sire is an outstanding Stallion named Cortez and his dam is a foundation mare named Cisco. Both seem to be unacounted for now but whatever the genetic magic that happened in this pairing sure translates in Dragon's babies. Out of all the good traits he passes I love the personality of his foals the best. All seem to have a good mind along with the brio! But that is not unique in our horses!