I Caught a White Whale 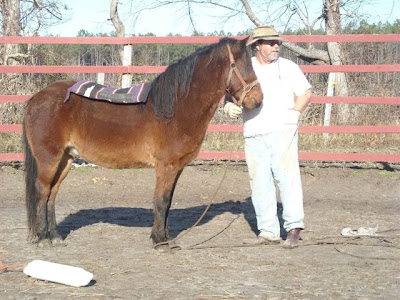 I rode Red Feather in the woods. He had been ridden in the woods a handful of times before, but never by me. He was the most athletic and the most violent horse with whom I had ever shared a round pen. He kicked and bit me more than all the other horses in my life time, put together. It had been 11 months since he had hurt me badly and in that eleven months we have become quite close. He prefers my company to that of other horses and I prefer his company to all but a few other humans.

We understand each other. He is me. When he was young he was truly wild and free. He made his own rules, as did I. When I was young I was the youngest head of a municipal government in Virginia. He was strong. When I was 14 I bench pressed 250 pounds. He was the master of his herd and I was the oldest son, of the oldest son, of the oldest son, of an only son. He lost the tip of his ear fighting as a stallion in the wild. I have had several broken bones, leg, pelvis, collar bone, and ribs but I have never worn a cast. He was perfectly willing to run over anything that got in his way. At age twelve I was the slowest member of my baseball team but had the most stolen bases, because if the ball is dropped after the runner is tagged out the runner is safe. (If, at the conclusion of the collision the fielder lies motionless on the ground, chances are he dropped the ball.)

But now we are both gentle and sweet natured. We have both learned to keep our emotions in check and we both have a strong preference for cordiality over confrontation. He has given me his most precious gift--his trust. I am working to return the favor by giving him a lighter payload. Next year when we do fifty miles together I plan for there to be about 25 pounds less of me on him.

I freely admit that at first there were many times that I either thought that I would never be able to ride him or that when I did he would mangle me the same way he did the saddles that he had bucked from his body. (He once attacked a blanket that he had bucked off). Now I have no such concerns. I was him when we were both young and now he is me, calm, peaceful, and absolutely in control because he is perfectly willing to give up control.

Ahab died pursuing his white whale. My white whale and I are set to live happily ever after. Ahab should have learned to relax.

I rode Red Feather in the woods.

(This shot is of one of the first times that Red Feather allowed anything to touch his back.)
Posted by Steve Edwards

Red Feather is turning soft :). Your prefect together now but think how perfect you and him will go together years from now after you have gone through tons of woods rides.