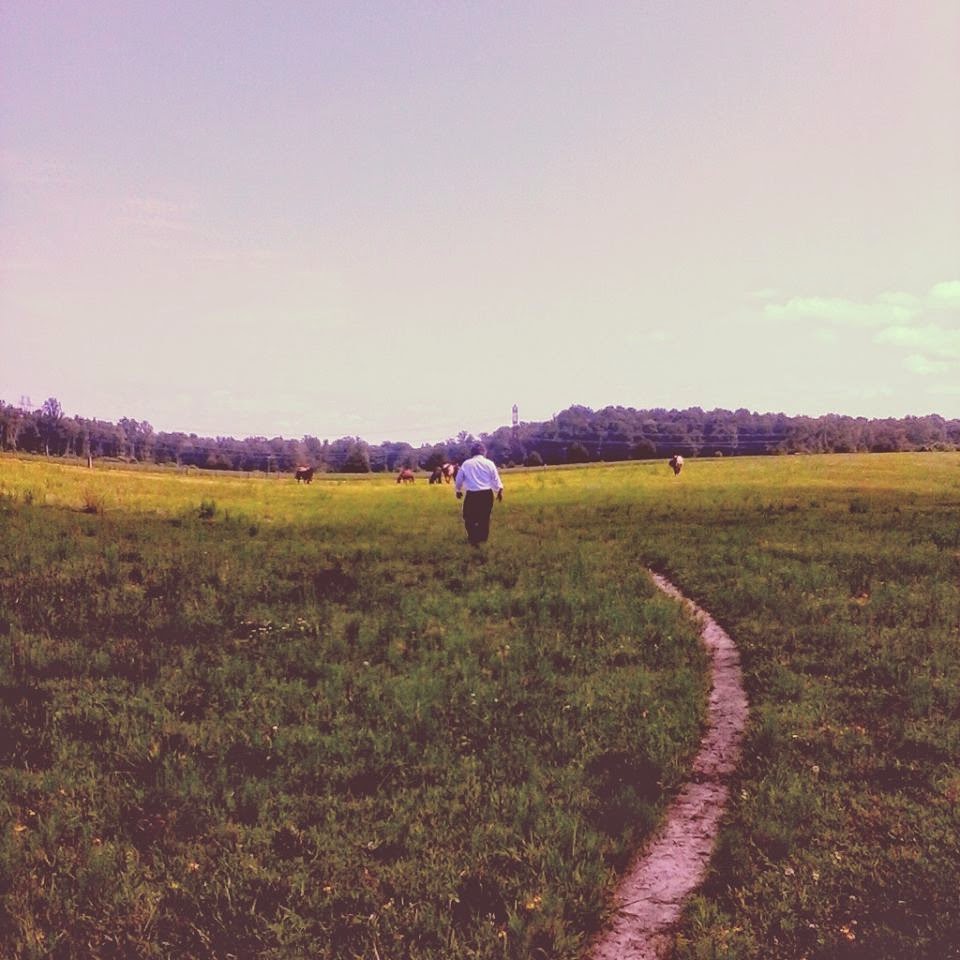 Modern life makes it hard to do.

They will happily eat an apple with a spotless skin (produced by applications of pesticide and herbicide),but would never eat one that had a brown spot or insect damage.

Living close to the soil teaches one very important lesson--to discern what is real.

The good news is that exposing kids to the reality of birth, life, death, planting, harvesting, and butchering can open the door to understanding what is real and what matters. In past generations city kids could become grounded by spending the summers on their grand parents' farms. Now only a handful of grandparents have farms.

That is why one of the most important parts of our educational programs is rooted in putting kids in contact with the soil and the animals that live on it.

Chris is growing up wonderfully over the past year. Chris waters the hogs. Chris asks if he can water the hogs. Chris does a good job of watering the hogs. Chris is becoming a man. The list is endless--Hailey and so many others (just mentioning Hailey by name because I miss her)--wonderful kids who are better than they would have been because they have been in the dirt in the horse lot.

Lydia thinks that for a lot of kids it is the most important thing we do.

I expect that she is right.

Raccon made a poor life choice last night...then by hook and crook came to me..so, not wanting to sit alone on the porch skinning him, I asked Joyah if she wanted to skin a 'coon with me..not your typical squeamish teen daughter, my Joyah.."Yeah."
So we did..she fended her curious little pup out of the mess while I converted said raccon into a nicely caped green fur. She has a good friend who sent me a nicely caped squirrel hide to cure the other day..skinned it herself.
That is the way to do it, and largely the reason we moved out here in the first place.
I was a very fortunate child for many reasons, we never had a whole lot most years, but there was always enough. Enough for dad and Lloyd to hunt and fish some, enough room and circumstance for Lloyd to move around, be indepentent and explore the world. I lived on the Lone Ranger, Gene, and Gabby..Thought "Emergency" was the best show ever..cartoons only on Saturday morning..not 24/7 in your face..No such thing as a video game, let alone a cell phone. Whatever bicycle I could scrape together and build was my trusty steed.
Yes, I had it pretty good. But for some small and seemingly random occurrences, I would likely be a dairy farmer in middle Tennessee..
No child can ask for better.
Many, Many children need more of that..freedom to explore, a chance to actually learn that falling off a bike, or horse..or that grouchy old dairy cow that daddy said to stay off of..and learn there are consequences for screwing it up.

Our lives are too complicated today..If it seems that this is a common theme in my thought stream, you have much to go on. Our society today is so complex, and inherently harmful that no sane human (whatever that is) can get through it in one piece. There is a massive movement to get back to the soil..the smart ones, the ones with some wisdom want out of the rat race..back to the soil. After all, all a body can really expect from the rat race is to get roundly beaten by the rats.
Some time ago, I extemporized in these pages on the subject of hen's eggs..and the economics of them. Farmer buys chicks from a hatchery, lots of chicks, buys feed from a feed salesman who works for a huge feed mill, insures them through several layers of bankers, finally raises that batch of chicks to layer age, produces eggs which must be sorted, graded, treated, shipped, packaged, repackaged, stocked, rotated and sold. Folks that takes alot of people to get a dozen eggs to your plate. Most of those folks, if you will pardon the rude expression are parasites, middle men, whose very existence add to the complexity and painful nature of our society today. Should you attempt to bypass any of these, there will quickly be laws, rules, ordinances or other insulting truck placed in your way by a wholly different set of parasites. Pfft.
Now, consider all these layers of complexity and human aggravation for each and every morsel of food on your plate at every single meal, and multiply that by pick a number of billions of meals every day..if that does not make your brains hurt, you should run out and challenge for a degree in agricultural economics.
There is a better way, and it starts with teaching our children to think and be close to the land, teach them that it is possible to make a better life, simpler, more robust..but not necesarily easier.

Be your own farmer, do it for your kids, do it for yourself, and for your world. I don't care if it is two tomato plants in a bucket. (it is December here...that tomato you are eating..came a minimum of 2500 miles to your plate) or two or three hens in the back yard living off of table scraps. Do something to feed yourselves and teach your kids to.
My neighbor, love her to pieces, but she is a squeamish city girl, has something which I do not..pasture space. I take care of her old horse on twice the space he needs, so I offered to buy a couple calves and raise them, at no cost to her, aside from the fuel savings of not having to mow underutilized pasture..figure 1200 lbs of fresh grass fed, custom butchered beef split among us...Sounds good, right?
Nope. She cannot deal with eating an animal she knows. Not her fault, but just the way she was raised.
Can we break this chain? Please?
-Lloyd

Things occuring in life of late which bring me back to this subject, and on a plane somewhat beyond, but connected to the simple need to be in contact with soil..growing things, simplicity in life..

Bureaucracy, societal complexity, "another new program" to take care of blah blah blah blah...
All these things have a certain entropy..they increase..inevitably to a burgeoning unmanagability (like this phrase..lol) and get to the point to where we as humans, at least the ones smarter than the average sheep, get frustrated and run from it. (Hence the movement back to the soil mentioned above.)
Let us look at this grubby, gritty little absolutely simple, beautiful program which has been built at Mill Swamp. First..it is simple, it must be. Two, we seek to inocculate kids with the seeds of inherent self confidence, the ability to think for themselves and their horse, to find a joy in learning without being distracted by the trappings of life. We seek to teach them to grow those seeds of confidence, not the spores of self feeding fears. We don't prettify..that is for Kentucky thoroughbred farms and race tracks and such. If you want pretty at Mill Swamp, you don't look at the barn, because we have none, you don't look for pretty painted white rail fence..we have none. (Who wants to paint fence? I don't even like building fence..)
If you want pretty at Mill Swamp, you go look at any of the Emilys..go look at Samantha, Jen Lydia, Attilla, Chris, Skyler, Chloe, Hannah, Hailey...The list goes on..you go look at any horse on the lot, I don't care which..they are all pretty, because they are healthy, well found horses..go up and look a Charlotte the hog, Pete, Spicer, War Admiral, or Seabiscuit, our goats. That is where you find beauty at Mill Swamp. All else boils down to what is practical, or useful.
Local horse barn..part rescue, part riding instruction, part boarding facility...A child shows up there, before he or she even looks at a horse, spends a half hour or an hour doing chores, then schlepps out tack, gets the horse, gets grooming junk together grooms horse for however long, tacks horse, rides for thirty or 45 minutes, then spends however long walking a barely sweating horse out, detacks, cleans tack organizes tack, grooms horse again...ect, ad nauseum maxima..
The result is often a bored kid and a bored, neurotic horse.

Kid at Mill Swamp...digs out appropriate tack...catches his own horse from the pasture, brushes the saddle pad and girth path, maybe cleans hooves, saddles the horse, bridles the horse gets on and goes. For hours. On the return, Horse gets untacked, loved on, returned to their pasture where they roll, drink, and go back to being a horse. No boredom involved. Simple and engaging.

It is said that resistance to change is a normal human trait..this is often brought up in the process of life becoming more complicated..face it folks..if you have a job in modern America, you know this to be true.
Is the change necessary?
Is the change desirable?
Who benefits from the change?
Now...here is the kicker..the nuts and bolts crux of where we as a race often go wrong with this process...What are the long term effects of such change? What are the drawbacks?
If the answer to any of these questions is an undesirable outcome, adding complexity or aggravation...the answer should then be obvious.

When the underlying principles become obscured by the trappings,
when the desired goal of building solid confident kids who grow up to be solid confident citizens is threatened by that which is not needful..then one should strongly consider handling it by the chosen method of our chief donkey in residence, Nick. Plant your feet solidly, bray and kick. Nick knows simple. -Lloyd