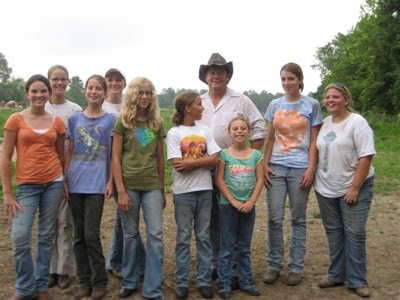 In 1859 Lincoln was encouraged to to seek the votes of the growing anti-immigrant and anti-Catholic movements in the nation by seeking to "fuse" with such nativist hate groups. His response was quite clear. He believed that such groups had no understanding of the purpose of this nation and no understanding of the central theme of the Declaration of Independence.

He said that he would only agree to seek the support of such groups, (particularly the Know-Nothing Party)under one condition. Any "fusion" of the groups with his still young Republican Party would have to occur under "Republican principles." In short, as long as they espoused positions that were morally abhorrent to Lincoln, he had no interest in their support. If, however, the leopard somehow changed his spots he could accept its support.

Such efforts will not work. They have failed for years. They will continue to fail. Thank God. If such efforts succeed in gaining the support of the established horse world within a generation our horses would be living the same unhealthy, miserable lives of obesity, lameness, and neurosis that characterizes the life of a horse trapped by the established horse world.

I do not want the approval of such people. The only hope to preserve the mustang as he is today and was yesterday is to draw new people into riding and to help them find natural horsemanship, natural horse care, and natural hoof care. They are the best students because they do not have to unlearn anything. Their head is not filled with sludge from the established horse world that must first be drained before that head can be filled with actual knowledge.

The established horse world has been calling the shots for fifty years and as such they are responsible for every crisis that horses face today, from the explosion in the number of cases of founder to the effort to bring horse slaughter back to America. I have no interest in fusing with such people.

However, there are many good people, through no fault of their own, who have been around horses for decades but understand nothing about them. The only "information" available to them came those who value a horse according to the color of fabric it is given at the conclusion of a horse show class.

There are many such people that are looking for ways to build a solid relationship with their horse and to learn to allow their horses to live as horses. With such people I will happily fuse. As Lincoln put it, "A fusion on any other terms would be as foolish......"