The Impact Of Social Media On Veterinary Care 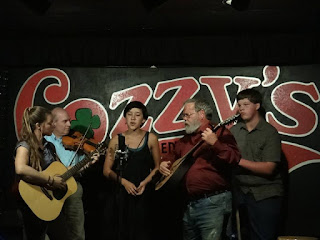 The internet makes it possible for a teenager growing up without a horse to learn natural horsemanship and gives that kid a chance to understand horses better would a teenager growing up on a ranch fifty years ago. Of course, there is bad information out there, but there always has been bad information passed on about the workings of a horse's mind. The effect is a tremendous net positive.
The same cannot be said of social media's impact on veterinary care. The worst  impact is that it kills veterinarians.

Witte’s study builds upon previous studies, such as a 2018 study from the CDC, which show suicide rates among those in the veterinary profession were significantly higher than for the general U.S. population. She hopes the results of her study will lead to improved administrative controls for pentobarbital access, raise awareness of the issue and ultimately decrease the number of suicides."  https://todaysveterinarynurse.com/articles/veterinary-suicide-rates-are-higher-including-veterinary-technicians/   (Link to the article containing this quote)

A myriad of reasons exists for the increase in suicide rates but one cannot look past the constant threat faced by veterinarians each day of having their reputation destroyed by a social media blitz. Twenty years ago a crank client was limited to sending a baseless complaint to the State Veterinary Board or perhaps even filing a lawsuit.

Now all it takes is a neurotic rant about how a vet "let" a horse die because of whatever action or inaction was taken. So vets are forced to practice defensive medicine. They have to provide appropriate care for the horse but must consider how everything that they do can be twisted on social media.

Many horse owners use google as their first opinion on veterinary issues. Of course, that leads to finding an explosion of misinformation on what the condition is, what caused the condition, and how the condition must be treated. The anxiety that a horse owner feels when confronted with a health issue is heightened from their miseducation.

When they call the vet after receiving this information they expect the vet to "do something." So the vet is put in the position of having to "so something" and often finds that it is simply good self protective strategy to mirror the horse owner's unwarranted concern. Reassuring the owner that they have done the right thing by seeking prompt emergency medical attention helps placate the owner.

The vet has to treat both the horse for its condition and deal with the owner's anxiety issues AND has to make sure that whatever action they take will be the alternative least likely to encourage a social media lynching.

It  is sad to think back over some of the experiences that I have had with our first rate vets from The Oaks, only to realize that the pressures that vets are under today imperil any vet who resorts to candor.

A weanling that I had had been attacked by a coyote. The wound was small , about the size of a fifty cent piece, and was oozing. The skin was missing from the wound. It had occurred several days before these "symptoms" appeared. The vet examined her and asked me which one of my riders the filly belonged to. I told her that it was my filly.

She moved me over to the side and told me that she was a bit confused. Why had I called her out to look at the wound? Was there any other problem?"

I told her know that I was worried about he infection. She looked at me rather surprised  and told me that the oozing was not infection, it was healing serum drainage. She told me to hose it out, put Cut Heal on it and not to worry about it as it would heal wonderfully on its own.

Another vet looked at a horse of mine and said, "Can't really tell what the problem is. Three things can produce symptoms like this. Lets treat for the first two and if she does not get better we can think about treating for the other one."

Or, what is often the very best medical advice--"Lets just leave him alone for two weeks and see if he gets better on his own."

But a vet who gives such sound medical advice today places his career at risk. If we leave him alone to heal and he dies the vet faces cries of "He did nothing to save my soulmate and left him in the pasture to die."

Nothing good comes of this. Horse owners are subject to needless stress by being convinced that every sneeze is evidence of cancer. The relationship between horse owner and horse is hampered as the horse owner gradually moves towards viewing herself as the horse's only lifeline. Saddles and blankets are replaced with supplements and drugs.

Social media is a constant threat to veterinarians who face the difficulty of trying to diagnose and treat an animal for whom diagnosis is often challenging, at best, and treatments are rarely guaranteed to work.

Will we ever be able to return to considering reality relevant to decision making?

My views of "social media" align with yours. I had seen an article regarding this on a dog blog - people going on google etc & taking the advice there rather than get their animal to a veterinarian. And likely the results after are as they are with horses & other animals. Maybe its my age, but I have no use for any of that. I use email & that is more than satisfactory for me. And if one of my animals has a medical issue, I can always call or email my vet & ask. That was how it was with my former horse vet I had much faith in him & his practice as I do with my present veterinarian. Quite honestly - why in the world would you trust some stranger to diagnose anything off the internet!
I feel for them all.
Maggie