Every Horse Is An Individual 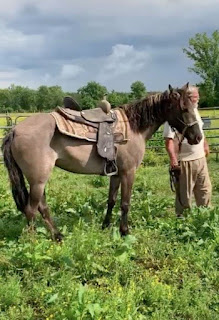 While tendencies to behave in a given manner exist, I have no doubt that behavior which can be linked to genetics is dwarfed by the behavior that is caused by the handler.

All of that behavior resulted from one bit of false information about the horse. The worst example that I have ever encountered was with a wonderful horse who had been given a negative name at birth. He was a great horse for beginners. We had several beginning riders start at the same time. They brought differing degrees of anxiety about riding to the horse lot with them. In a week or two I started hearing talk about how the horse was "living up to his name."

In a month he was a pariah to the new riders.

Many years ago I obtained a mustang mare from someone who was housing her and selling her for her owner. When I picked her up I was pleased with her temperament. The person that I met when I picked her up explained to me that he was not a "horse person" but that she sure seemed sweet and that she had been ridden and was doing great in her training.

I took her home and saddled her up. My little sister hopped on and rode her wonderfully in the round pen. A week later when I spoke to the same person he apologized profusely. He had gotten the horses mixed up. It turns out that this mare had never had a rider.

I told him not to worry, she has had one now.

This spring I began training a Corolla mare who I knew had not been trained in many years. As soon as I put a rope halter on her she responded with the lightest of touch to the lead rope. She took to driving in the surcingle as if she had been doing so every day of her life. She took a rider perfectly.

I assumed that I was incorrect in the information that I received concerning her training. I contacted the previous owner. I was surprised to find out that years ago she received ground work training but had never had a rider.

Of course this does not mean that one can simply hop on untrained horses and ride away. My point is that projecting your fears and prejudices on to the horse will assure a negative result.

The picture above is from yesterday. She is one of the faster learning, gentler horses that I have ever handled. Prior to arriving with us she had been handled about twice a week, for the previous three months, by a very experienced, first rate trainer.

She is a formerly wild BLM mustang. Had she been treated with the fear that most people have of wild horses she would not have that saddle on her.

Projecting one's fear on the horse would be bad enough. What makes it so much worse is that projection of fear seems to amplify it.

Except that  every expert spokesman for the established horse world are  all the same.