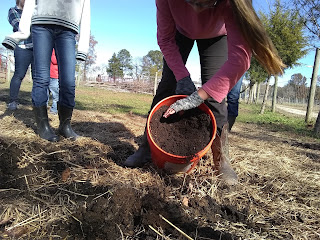 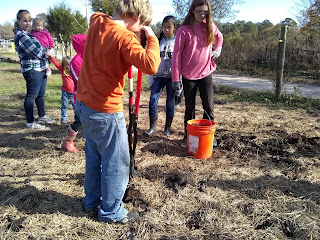 We are doing an experiment in our Homeschool program to test some applications for natural pasture enhancement. We use no commercial fertilizer or herbicides. I am learning more every day about compost, permaculture, and regenerative agriculture. I am particularly pleased with what I have learned through online classes with Simple Soil Solutions.

I was always puzzled at the waste layers that built up under round bales. They stayed very moist, were composed of layers of old hay and horse manure. To my very uneducated mind they appeared to be the perfect self creating compost pile. Except that it took forever for them to break down and often after they did they left beautiful, rich looking black soil upon which nothing grew for a couple of years and when it did grow the resulting vegetation looked no stronger than grass grown several feet away from the old piles.

I now understand the effects of compaction and lack of oxygen in those piles. We have a rather large vermiculture operation in which we add only coffee grounds, weed stems, horse manure and the occasional bit of old hay. We keep it in an old hot tub that we buried to ground level. It rarely has any problem with freezing. A year ago I set out 1000 red wigglers in the container. They have been fruitful and multiplied.

About four times a year we add around 500 pounds of manure from the pasture to the container.

I began to experiment with spreading the old layers of hay waste out in the pasture. As soon as some air could get to old hay that I was spreading it broke down super fast and grass took off. However, it is very hard work to rake and pitch fork these areas out. On the new land we had a build up of waste hay that was only a few months old. We used a post hole digger and laid out of grid of twelve postholes about a foot deep. We added compost from the vermicompost system. It was loaded with beneficial microbes. To my surprise the muddy area began to dry up rather quickly and the waste hay began to disappear.

In the pictures above we are doing an experiment. Audrey's pictures show two of these compacted waste hay areas. In one we use post hole diggers and covered the vermicompost in the holes that we set out in the waste area. (The waste areas had broken down so little in their extreme compaction that we found layers of horse manure that were still completely intact even though it had been buried for at least several months.) In the other we used an equal amount of Vermicompost and simply applied to to the surface of that waste pile.

Of course we hope that simply top dressing with our active vermicompost is going to provide results as good as injecting it under ground does. Would have been better to have done this experiment in the summer but we shoud still get results.