And There Were Once Two Twelve Year Old Girls 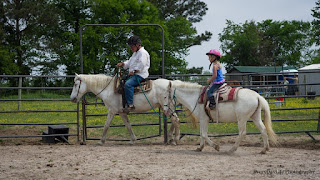 Each had gotten a three year old thirteen hand, green broke pony for their tenth birthdays. Both girls were athletes and neither had any fear of their young horses. Experienced horse people urged their parents against getting such young horses for such young children, but for reasons of their own, the parents ignored that advice.

Each child showed incredible skill at riding and relating to their horse. Each girl  rushed home from school every day, dropped their books on the kitchen table, changed clothes, and hustled out to see their horse.

One of the girls received first rate riding instruction that built on her natural skill as a rider. At age 11 she was winning at every local horse show she entered. By age twelve she was mopping up the competition at regional shows. She was alone in the ring, focused, confident, silent---and so very alone.

He future as a competitive rider could not be brighter.

The other girl was not drawn to competition. She sought out long, slow rides in the woods peppered with hard sprints around the edge of the field. She often rode alone, sometimes with other children, but most often with her parents as they joined in on the old horses that they had had for years. The solitary rides were silent, but for her occasional soliloquies to her horse regarding the challenges and successes of junior high school. Her rides with her parents were filled with long discussions about every facet of her life and how they faced challenges at her age.

After winning her first statewide competition one of the girls was told by her trainer, "You have outgrown this little pony. If you are going to be a serious competitor you will need a much bigger horse.--Time to leave him behind."

She remained stoic and did not cry until the trainer left. When no one else was around she threw her arms around her pony's neck and cried harder than she ever had, harder even than when she learned that her Grandmother died.

Exhaustion was the only thing that stopped the tears.

She tried to let her parents know that she did not want to sell her pony, but they were hard to talk to. She knew how happy her riding made them. They beamed with each trophy she won. Her mother recounted every step of the most recent shows to every one that she met that week. Her father let everyone know how much money the horse show life was costing him. Every penny spent was further proof of what a great father he must be.

He could not wait to tell his golfing buddies  about the  $25,000.00 check that he had just written. He and the trainer decided to surprise his daughter by simply putting the new acquisition in the old pony's paddock late one Friday night. Even better, they had found a wonderful, "forever" home for the little pony and while the daughter was at school that day the new owners came and picked the pony up.

When she got home she saw the stranger standing in her pony's paddock. She immediately understood. If she was going to be a serious competitor she needed a bigger horse. The night before when she went out to the paddock her pony ambled over to her and put his head on her shoulder.

That was the last time she ever saw him.

When the other girl was reaching her thirteenth year she started getting tall and gangling. Her friends wanted to know when she was going to get a big, beautiful, super expensive horse as her competitive friend had.

She was confused. She already had a horse. Why would she want another one?

When she was about seventeen she stopped getting taller. As she came closer to her adult weight more and more she found herself confronted by experienced horse people who told that she looked silly on a 13 hand pony and she needed a bigger horse.

She never argued with them. She knew that there was no use. Those people thought with a different part of their hearts than did she.

The hardest part about college was missing her pony. By her senior year she found a farm where he could stay only a few miles from her dorm. Her life was complete again.

And it was not long after college that she got married. Her husband loved her pony, and it was good for him that he did. She taught him how to ride. As their careers progressed they could afford a horse for her husband.

They took long, slow rides in the woods peppered with sprints around the fields. The rides were filled with long conversations about every aspect of their lives and how they were dealing with the challenges they faced.

She had to lay off of riding for a while. The doctor was not keen on the idea of a young women with her first pregnancy sprinting around the fields. A few months after her daughter was born she mounted back up. By the time her daughter was four the child could catch the old pony and saddle him herself. Her mother purchased another pony and the family of three set out on long slow rides in the woods, peppered with sprints around the fields. They talked about every aspect of their lives and how they were dealing with the challenges they faced.

And when the little girl was in the second grade her mother got a call to come to the school right away. It seems that the second grader had had an anger control episode. She not only smacked a larger boy, she pushed him down and kicked him over and over until she was pulled off of  the cringing little mass of tears curled up on the pavement.

When her mother entered the principal's office the child was still angry. " I hit him , Momma, because he was teasing Carlton for riding the special bus and being in the special class. Momma, he called Carleton a 'retard.'"

She stood up and took her child by the hand, thanked the principal for handling the situation and assured her that she would take further action.

When they got in the car instead of going home, they drove straight over to Carleton's house. She introduced herself to Carlton' mother and sat down in the living room and had a long talk with her about their children.

She explained to Carlton's mother that she could only think of one thing to do. Carlton needed to come over to visit about two or three times every week. She told her that her daughter had an old thirteen hand pony that would be the perfect horse for Carlton to learn to ride on.

And Carlton learned. And Carlton rode. And Carlton laughed. An her daughter laughed with him. And Carlton joined them for long slow rides in the woods, peppered with sprints around the field. They talked about every aspect of their lives and how they were dealing with the challenges that they faced.

And when the pony was thirty four years old he laid down and did not get up. Carlton was grown now and worked over at the sheltered work shop. His mother picked him up from the job and took him over to the paddock.

The pony put his head in Carlton's lap, closed his eyes and died.

And that was the last time she ever saw him.

Thank you for this story. I dearly wish I had been smart enough to keep my pony. I did rehome to a place with 3 little girls, the first having outgrown her pony. Ponies are the best thing for any child, no matter what the breed.

Thank you from the bottom of my heart for this story. I needed to read this today. It is why I work with children and ponies in a non competitive setting.

The whole idea that newer & bigger is better seems to be the caveat nowadays. Something breaks - throw it away & get new! An animal that you have had for years gets older? Thats ok - give it away or get rid of it and get a new one. The idea that size matters??? And bigger is better??
Shameful that children are learning this from their parents and peers.
Mill Swamp certainly should be proud of going its own way - and teaching the respect & caring that kids should be learning everywhere.
Maggie

Does this help to answer any question as to how many wonderful horses & ponies wind up at auctions and slaughter trucks?
Newer & bigger is NOT better - thats what all parents should be teaching their children!
Maggie