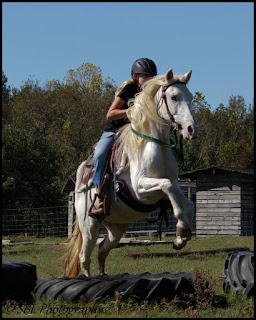 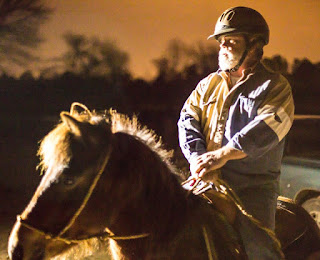 North Carolina's state horse is the Colonial Spanish Mustang of the Outer Banks. Holland, shown above as I began to set out on a big ride at 3:00 am, is from Shackleford Island. He was born wild and born tough. The biggest surprise about this blocky little horse has both explosive short distance speed and endless endurance..

He has been carrying me at around 220 pounds for several years now. When we went to our only other endurance race the mass of riders on their Arabs and Anglo-Arabs were confused as to why we had a shaggy little pony entered in the race. We carried five horses to that race, three Choctaws, a high percentage Choctaw/BLM cross, and Holland--13.2 hands of barrel, heavy bone, and muscle. We won four of the top ten spots in that race. Jen rode Holland on that ride and I was on Joey,one of my Choctaws.

Holland could have won the entire 30 mile race but for his resistance to having a vet take his pulse.

On May 6 Abigail will be aboard Holland and Lydia will join her on Manny, a Choctaw. That is Abigail above doing a little jumping on my wife's horses.

As he prepared to enter the ring surrounded by a despondent group of trainers and corner men before the "Rumble in The Jungle" with George Foreman, Muhammad Ali brought life to his entourage by simply repeating "We gone dance. We gone dance. Oh yeah, we gone dance."