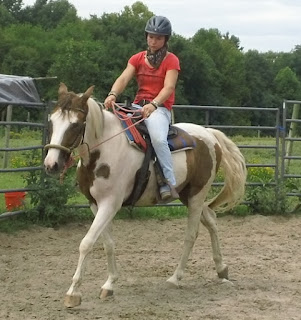 It's raining and the rain is getting worse as the minutes pass. I just left Lydia, Jen, Abigail and Wendell at the horse lot. They are loading Manny and Holland to go to Biltmore in Ashville, North Carolina for an endurance race.

Jen won't be racing in this one. And I am proud of her for that.

I have little good to say about nearly all forms of equine competition. All too often the interest of the horse falls in way behind the interest, or even the whims, of the rider.

Jen is not letting that happen.

Her horse is the great granddaughter of Choctaw Sundance. Looks Up, the daughter of my horse, Ta Sunka Witco, and Star Dust, a BLM stock mare belongs to Jen. Looks Up is a super athlete. Jen has brought her into peak cardio vascular conditioning. Last spring we did a little "in house" 25 mile race. Looks up was in such solid shape that when it came time for the vet check her heart rate had dropped to sufficient levels with no break but for being walked the last 200 yards in.

But a few weeks ago she got a very minor strain or muscle pull. She is a ball of energy and often zips around the pasture for no reason that the human eye can see.

Her very minor injury remained very minor but was not all the way healed as of two weeks ago. Jen made the decision to pull her from the race. We have several other horses that she could have ridden in this race. All were conditioned enough to have made the run safely, but none were in peak condition. Holland, a Shackleford, and Manny, a Choctaw, are in perfect shape. Jen knows why we enter such events--to promote the talent of these nearly extinct horses in the hopes that more people will breed them.

If Jen had ridden another one of our horses who was not in top cardiovascular shape the likely result is that it would have lead to slower times for Manny and Holland.

So Jen made the painful, and very mature decision, to be the horse hauler and to be part of the pit crew for Manny and Holland.

Lydia has worked very hard to get Manny's mind and body ready for this event. She would not have been able to do that without Jen.

You see, Manny was not quite green broke when he came to us. It was Jen who gave him his earliest training. That is her on board Manny in those early days. Her skills put him on the rode to being refined by Lydia.

Yes, Jen made a hard, mature choice, keeping only the interest of the horses in mind.

I am not be surprised.

Yes, she is one of my big girls, but on days like this I am reminded that she is also a grown women.
Posted by Steve Edwards

What a beautiful testimony! So proud of Jen and all the good folks there, as it was a collaborative effort that produced this moment! It is also a wonderful testimony to the power of the program that can help produce such maturity and character -we feel blessed to be a part of it! We will be praying for all horses and crew this weekend. Godspeed on your journey and His blessings for a great time, victory and safe return home!

Lauren responded first with our sentiments, but stated more beautifully. We are blessed to have found this place and to be welcomed. Can't wait to hear all about the weekend!