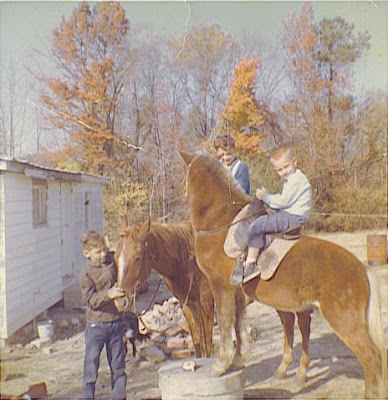 When people create arbitrary rules of proper horsemanship it is often the horse that suffers. I came across a great example in an of hand comment that, "No three year old horse should ever be ridden by a child."

Of course, the statement is rooted in the idea that kids should only ride old, "bomb-proof" horses. The problem is that no horse is bomb proof. On the other hand, kids can be taught to become horse handlers at a very young age and have been in every horse culture in the world's history.

The picture taken above is from a time when parents believed that children should not be raised in a bubble, sheltered from all of life's challenges. Instead, they believed that good parenting required that a child be taught to welcome and overcome those challenges.

Yes, a three year old horse can make a great kid's horse if someone has taken the time to teach that kid to handle a horse. In fact, the horse standing on the well just happens to be three years old when this picture was taken. His rider got him when he was two and the pony was one. By age four his rider could take him over jumps and run him as hard as he could go.

That picture is from 46 years ago. Riding a young horse stunted neither my growth, nor my morals. Tonka was tough and smart. Because I could not get in the saddle at such a young age Daddy taught Tonka to lay down for me to mount up.

This picture was taken behind the Little House when I was four years old. Tonka has gone on, but the Little House and I are still around. In December, Daddy walked along beside my five year old niece as she rode her horse in this year's Christmas Parade. Spotted Fox turns three this summer. He has not yet been gelded.

The formula is simple--more kids riding more horses=fewer horses at the slaughter house and fewer kids with empty lives.
Posted by Steve Edwards

Awesome picture and post, Steve. Can't wait until my kids start learning how to handle horses the way you were taught. When they turn 4, I'd better not catch them holding the horn like a sissy!! ;-)

Wow, Steve. Yes, I'll have to agree with Rebecca--I want my hypothetical children to ride "real" horses! (You were even cool as a little kid!)
--Emily

I just love that picture! You were so cute. Who are the other boys in the picture? When did you start riding?
-Lydia