Being Loved to Death 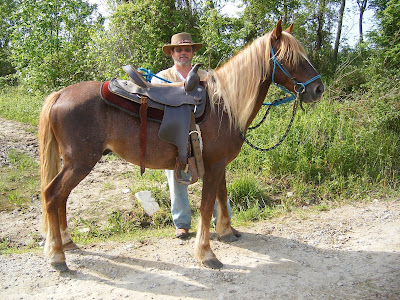 Ignorance on the part of owners is at the root of most of the problems that horses face today. Too many well meaning horse owners think that obesity is a trait to be desired in horses. The horrible phrase used of halter competition horses the "Fat is the best color" embodies this ignorance. It is sad how many people think that it is cruel to refrain from feeding a fat horse "just a little can of grain."
Nearly as sad is the sight of so many horses who wear shoes "to protect their hooves" when the reality is that their hooves need to be protected from shoes. But surely nothing can be worse than the warm, comfortable stall. We punish humans by confining them in 8x12 prison cells, yet many, if not most, think that a stable is not only good for a horse, but is an absolute necessity. Every time I hear that horrible phrase, "turnout", I know that I am about to hear about a horse who is being abused by being kept confined in a stall for at least a portion of the day and allowed to be turned out to a more normal existence only for a portion of that day. For horses we call this horrid environment, full stable board. For humans we call it maximum security prison.
If you think that your horse loves his stable, just open the door and step back and see what decision he makes.
Lastly, and granted this is the hardest choice to make, but the decision to kill a horse is all too often spun into an act of love. I am not talking about horse slaughter, though it does sicken me to hear supposed horse lovers endorsing horse slaughter as a way to prevent neglect and abuse. I refer to those who demonstrate their love for horses by insisting that every horse going through a rough time should be put down to put it out of its misery. UNDERSTAND, I AM NOT REFERRING TO A PERSON WHO LOVES A HORSE THAT IS TRULY SUFFERING FROM AN INCURABLE HEALTH PROBLEM. I know of such a person who has been going through that horrible situation recently. I feel for her and there is no aspect of the horse-human relationship as painful as what she has been going through.
Instead, I refer to those who view horses as disposable and seek to prove how much they love horses, or all animals in general, by insisting that those who are infirm to the point that their infirmity is obvious be quickly, humanely killed.
Valor is a Corolla mare who was in such horrible condition that she had to be removed from the wild this spring. I do not know what her original health problem was, though I suspect that she had developed an infection from giving birth. Nursing her foal pulled her down even more. She had a heavy worm infestation which certainly resulted from the debilitation of her immune system by what ever brought her into this downward spiral. She was covered by engorged ticks as I had never seen any horse so infested. She was the most emaciated living creature that I had ever seen. She hobbled about with a hip so devoid of flesh and connective tissue that the hip did not support her. When I first saw her she did not seem to have the power to raise her head.
But she had the power to graze and if she wanted to fight to live I was not going to get in her way. Good hay, a range of wormers, minerals, and metamucil with several months of patience restored her. I have not seen her in a few months. After she regained her health she returned to the Corolla Wild Horse Fund to await adoption. Some lucky adopter will get a Corolla mare that is halter broke and tough as raw hide. I admire survivors and few horses have survived greater tests than Valor.
I knew of another Corolla whose health was not the best. He had to be removed from the wild, mainly because of his propensity to escape the sanctuary and get in the highway. A "horse lover" who saw him vehemently insisted that he be euthanized because he was "old and hungry."
That is him in the picture above, four months later. If any of you ever find me old and hungry, do not have me put down. Go get me a hot dog and some Geritol and I will be just fine.
Again, I know that there are times that the horrible decision to end equine suffering must be made and I am not criticizing those who have made that decision. I only wish that there were fewer people out there who "love" horses to death.
Posted by Steve Edwards

There are many of us "horse lovers" who feel the same as you do. We live with the Corolla Wild horses and I often reflect on what they would think if they know what many of us do to their cousins on the main land.

That is one pretty horse in the photo.