Earning the Trust of a Wild BLM Mustang 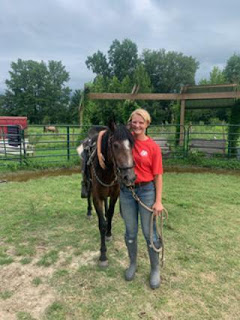 One cannot teach what one does not know. One can not give away what one does not have. One who is without trust cannot teach a wild mustang to trust. And way too often one does not know what it is is that does  not know.
For over seven years I have worked with those who are in the in patient PTSD program at our local Veterans Hospital.  The weekly programming that we did with the horses and our guests from the Veterans Hospital was deceptively simple--we brush horses and then we work them in the round pen. We explain how prey animals respond to various cues and situations and how that is precisely the same way that people who have been traumatized tend to respond.
Participants learn self understanding, build self confidence, and work toward building trust in the animal with whom they are working. Like those who have been sufficiently traumatized, a horse seeks security as its primary emotional drive.
And then we deal with the difficult issue of learning how to trust.
This horse arrived at our horse lot from a BLM auction last Saturday. He was terrified and as wild as a deer. This picture was taken about thirty one hours later. Just before the picture was taken the horse stood peacefully as Curie mounted up on him.
He had spent much of the day being patiently handled using techniques of natural horsemanship for much of the day. He is learning to trust people.
It is not an exaggeration to say that most of what I understand about myself I learned in the round pen. When one looks down at a silted in, undisturbed, mud puddle one cannot see anything that is under that silt. But when the water is whipped into a furious mix, leaves, twigs, and bark come up out of the silt and reveal themselves. For years I have looked into the silted puddle that was my core and could see nothing beneath the surface. But lately a storm has flooded that puddle and I see much that had sat silently under the mud.
I realized that as well as I worked with terrified horses, I could do better if I could learn to trust. I came to realize that, though I defined the term very differently than do most people, I do not fully trust those of whom I care the most. I trust them to be honest with me, to care for me, to be reliable--to be everything that people normally think of as "trust worthy".
It is just that  I do not trust them to live.
Those who have been the closest to me all too often have died or moved on. On a certain level, since Lido died I have not really expected those in my life to be around over the long haul. In the big picture this chronic instability impacts most aspects of my life. In the smaller picture it radically impacts my effectiveness in training horses and teaching kids.
Now that I I can see what is in the mud hole I am in a better position to filter out the parts of it that hurt. And that is what I shall work on doing. I expect that if I do find a solution I will find it in the round pen.
That is usually how such things work out.
Posted by Steve Edwards