Saving the Corollas: How It All Began 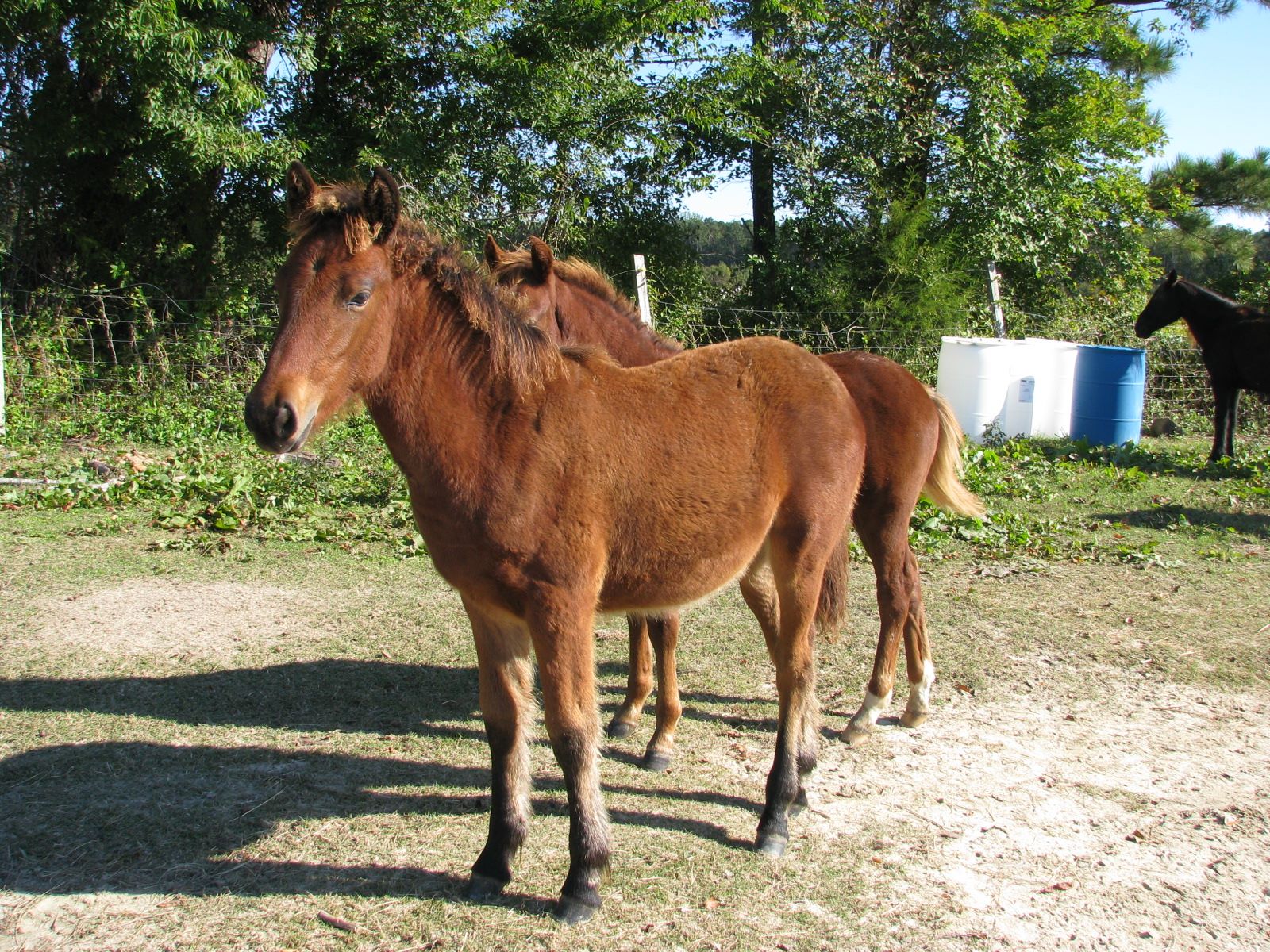 The kids were rolling out of the van/station wagon as soon as it came to a halt. They were among the first kids in my riding program. It was over a decade ago. They were excited to a degree that one rarely reaches after about age eleven. They were yelling and racing to be the first one to tell me of the urgent matter at hand.

"Mister Edwards there are horses on an island that need our help. They need someone to adopt them. You have to go help them now."

I assumed that they were referring to Chincoteague.

"No they are in Carolina and they need our help now.!!!!"

The regional paper had run a story on the Corollas. I had not seen it but the kids had and the ride from Portsmouth had given them plenty of time to get whipped into a frenzy. They remembered the key words "wild horses", "Spanish mustangs", "injured" and "adoption."

They were yelling these words as they ran across the pasture to me. One of them had the article which was about the herd management program at Corolla.  I promised them that I would call.

The Corollas may very well be the oldest and rarest distinct genetic grouping of American horses. A small wild herd exists just north of Corolla, N.C and south of the Virginia line on the Outer Banks. They teeter on the brink of extinction, threatened by encroaching real estate developments, entrenched bureaucrats and powerful Washington lobbies that view these historic horses as trivial impediments to progress.

A handful of horses remain at Ocracoke, near the middle of the Outer Banks, who have traces of Banker lineage but have been infused with the blood of modern horses. (The beautiful horses of Chincoteague (Assateague) on the Virginia/Maryland border have also been infused with a range of modern horse breeds). Near the southern tip of the Outer Banks is the island of Shackleford where the only other herd of Spanish mustangs, undiluted with modern breeding, can be found.

These horses came to the southeast with the Spanish exploration in the 1500's. For about the next 200 years the Spanish horses were the only horses found in the southern colonies in any significant numbers. Small, sturdy, intelligent, easy to train and surefooted in water, sand, mud, and rock--they were the perfect frontier horse. In an era before the existence of roads these horses were superior to large northern European horses in every way. But with the roads came wagons. Larger horses than the Spanish steeds were better at pulling heavy wagons. As northern Europeans began to dominate the southeast they shunned the little horses that were associated with the Spanish and Indians, and to a lesser extent, former slaves of African and Caribbean origin.

Once the horses of kings, the Spanish Colonial horse fell out of style. He became the rusty old pickup truck of his time--a symbol of backwardness whose only purpose was to give way to progress. Though now the Coastal islands of the south are prime vacation sites, until relatively recently they carried more of an an undeserved  stigma of poverty, ignorance, and backwardness than did the hollows of Appalachia for those who deemed themselves the official arbiters of all things proper in the South.

Even the word, "Banker", which applied to all things of the Outer Banks, not just the horses, was term with a derisive tinge in the minds of those who used the word as if the mere use of the term left a foul taste in their mouth. Their close cousins to the south, the Marsh Tacky of South Carolina, suffered a similar fate. The term "Tacky", indeed, means plain, ordinary, and commonplace.

As the horse moved from being the partner of the working man to being the toy of rich man the Banker horse seemed destined for oblivion.


Perhaps they would be gone, but for their champions like Dale Burrus, Karen McCalpin and Carolyn Mason. It is much more convenient for those who seek to destroy these horses to be able to call them simply back yard ponies with no historical significance. They can only do that if people are allowed to ignore the spectacular report written by Vickie Ives of the inspection tour of the wild herds of Corolla and Shackleford which nailed shut any question about the lineage of these horses. (That report can be found on our website www.millswampindianhorses.com).

Future posts will explain more about precisely how the off site breeding program works and how you can become a breeder. The yearlings shown above were born of our breed conservation program.

But as you read these future posts keep one thing in mind, not a single one of us in this effort stands to make a penny from it.

I am too old to play a bit part in an infomercial. We are doing this because we believe in it.

And you can be part of this effort. Go to our website www.millswampindianhorses.com and make a contribution today. We are a 501 (c) 5 non-profit breed conservation program and as such contributions are not tax deductible.  We are in our second day of our month long social media fundraising effort. Feel free to share this with everyone that you know who cares about horses and people.