Survival of the Chillest 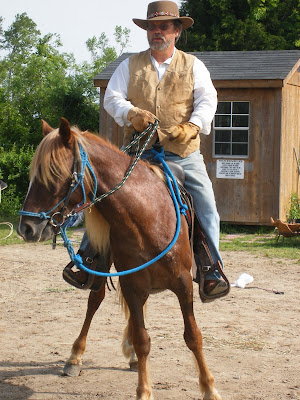 Why are wild Corollas so gentle and easy to train? Without thinking, the instant answer that comes to mind is that they have been exposed to people all of their lives. That cannot be the answer. A modern domestic horse that has seen people every day of its life but has lived in an open pasture until it is 10 years old, without any training, is likely to be much more difficult to train than a wild ten year old Corolla stallion.

The Corollas are not just the easiest wild horses to train that I have encountered, they are easiest horses of any kind to train that I have encountered. On the other hand, western mustangs tend to have a much more reactive, nervous personalities. Those traits served them well. The horses with the greatest flight instinct were the ones that survived in a world filled with predators of various ilk.

The Spanish mustangs of the the Outer Banks of North Carolina have lived for several hundred years in a world devoid of predators. However, they evolved in an ecosystem that has little if any thing in it that we would consider normal horse forage. A horse's body is as strong as steel, but his digestive system is as fragile as crystal.

In the modern world high strung, high performance horses constantly battle digestive problems, from ulcers to colic. Colic remains the leading cause of death of adult horses. Could it be that the high strung, nervous members of the early Spanish mustang herds on the Outer Banks were more susceptible to digestive threats? If so, could that mean that the calm, relaxed Spanish horses that would have been cougar feed in the west would have been the survivors had they lived on the Outer Banks?

Croatoan was a mature, wild stallion when he was captured outside of Corolla. Yet he was as calm as a Basset Hound. If you find a horse more relaxed than Croatoan check that horse's vital signs right away. (It may already be too late to save him!)

As your doctor will tell you, stress kills. Perhaps the Corollas survived because they became genetically programmed to avoid over reacting to stress.
Posted by Steve Edwards

That is a fascinating observation! Whereas survival of the western mustangs favored the most highly reactive (i.e. most easily stressed), survival in the harsh gut-challenging diet of the Outer Banks favored the most laid-back, least stressed. By golly, I think you are onto something.

And I am a wee bit jealous (as owner of the "reactive" kind).