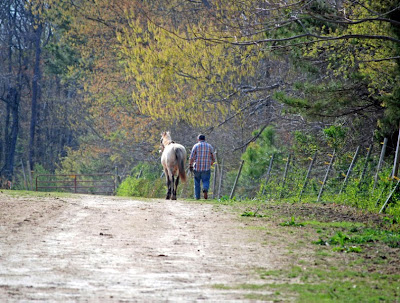 No rush yesterday morning. I had no early court and no plans to shower or shave. I had already had a hunk of cheese for breakfast. I had time to walk, look and think.

I love the green of early spring as much as I detest the mid winter muck and mud. Yesterday was the greenest day of this just born spring. I walked all around my pastures--observed, relaxed and thought.

At first a disconnected string of thoughts--How long had it been since I wore my false teeth? I used to wear them for jury trials but now I do not even remember where they are. What a strange entourage accompanied me. War Admiral, Sea Biscuit, and Spicer, my Colonial Spanish goats walked step for step with me, eyes constantly checking out every movement around me--staying close by, looking oddly protective of me, like a Secret Service detail for Dr. Doolittle. My rooster followed for the entire perimeter of the main pastures--a one mile route--quite a journey on five inch legs.

No other humans, no sounds. Only history--like a vortex where somehow is and was happen at the same time. I looked over the the spot where Lido, my little brother, died. We walked over to where Granddaddy Horace built his goat pen 70 years ago. I saw the Little House where Momma was born and the stable where she kept her pony--the same stable that my pony, Tanka, was in when he coliced badly when I was four years old. To my left hand was the road where the first phone lines ran in from town. In 1927 those phone lines brought the news that Hilda Barlow had been murdered and that people were assembling to lynch Shirley Winnigan. The phone lines ran by the little tenant house that I remembered Glosten Winnigen, Shirley's younger brother, living in when I was a child. Glosten died year before last.

Beside Glosten's house was the field path where Granddaddy Horace's granddaddy thought he saw a long line of mourners following a casket back toward what is now my tack shed. He went home, to the site where my father lives, nervously relayed what he thought he had just seen, sat down, had a stroke and died.

At the other end of the path is Stallings Creek Road, where in 1831 the news would have come in that Nat Turner had lead America's bloodiest slave insurrection in neighboring Southampton County. Stallings Creek was likely the rode used by Benedict Arnold when he lead British troops into Smithfield. Even worse, it is only about six mile from where Banastre Tarleton, the murderous Red Coat cavalryman landed when he lead stroops into the soutside of the James.

Stallings Creek runs beside Mill Swamp, about three miles from Pons, where my first white ancestors settled in the 1630's, about six miles from my horse lot.

My pastures sit about 1/2 a mile from the remnant of an old wagon path that the farmers used to get to the James River at Burwell's Bay. The path likely followed the Indian trail that went near the Powhatan village of Mokete. John Smith visited the village in 1608. That village is on the farm that Daddy's family owned. It sits four miles from the back of pasture number 4.

John Smith may have called it Virginia, but the people that had lived and farmed this land for decades before the English came knew that they were in Mokete, a village of the small tribe of the Warrosquoyacke, which was part of the empire of Wahunsonacok, the first Powhatan, the father of Pocahontas and the ruler of all of Tsennacommacah. Among the people of Tsennacommacah were the Pamunky, Mattaponi, and the Chickahominy, from whence came my earliest American born ancestors.

Across some of my pasture Norm has recently completed a trench to hold the water line from the Little House to the tack shed. As the goats stepped across the trench, I looked down to see a small spear point of a type made from 1000 B.C. to about 500 A.D. in this part of Virginia. The spear point shares the soil with the ashes of Momma and Lido.

And that is what my goats, my chicken, and I walked through yesterday.

I am not certain the exact route that Benedict Arnold took when he raided our area. He likely passed our farm en route to his camp site 5 miles from the horse lot, just outside of Smithfield.

I am not certain the exact route that Benedict Arnold took when he raided our area. He likely passed our farm en route to his camp site 5 miles from the horse lot, just outside of Smithfield.

Love your blog but Sounds of Silence is the best one yet!

"Nature's first green is gold,
Her hardest hue to hold"
from Nothing Gold Can Stay by Robert Frost

Yes, the circle will be whole again...

First time I have read your blog! Sounds of Silence is wonderful.

I also must post a public yakoke (thank you in Choctaw) to you and your riders at Mill Swamp who sent us monetary donations to help us after our bank barn fire last Oct.

God Bless You All! Our new barn is up and in use, tack and supplies replaced because of your generosity and that of many others too. We are ever grateful to you, friends!

Steve, I really enjoyed "Sounds of Silence". I like to walk along my pasture and think and remember too. I live about 2 miles from Daniel Boone's cave and my property is the backside of what was once part of a big plantation. I have found arrowheads in my pasture and wondered about the people that made them. Did Daniel Boone ever cross my front yard? Were Indians hot on his trail? His parents are buried just 18 miles from our home in Mocksville. And there is supposedly an Indian grave in walking distance of my property. It is interesting and tells about where we came from. Your family land is very rich in history and I am glad you have written it down so that future generations can walk and remember what you did many years from now. It's important.

The history is amazing. It is wonderful that you know it and share it with others. So many don't take the time to think of what was - ore even what will be, it is just what is for me NOW. Thanks so much for sharing your reflections with us.

What a amazing history lesson! This post is one of your finest. It truly takes your reader back through centuries of time existing fluidly together... a profound read best done early in the morning...one I will come back to and share!