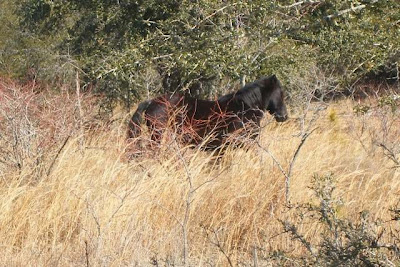 In about an hour I will mount up Holland, my 13 hand Banker horse from Shackleford Island and will ride him fifty miles. We have done this before but not in quite these conditions. Today will be damp and rainy with wind gusts of over 40 mph.

During the month of April we will host an introduction to Natural Horsemanship series which will feature the training of Edward Teach, a wild Corolla stallion. Edward was captured because he received a wound during a stud fight that would have killed him.
We have done these series before, but not in quite these conditions. Our operation is such that it would easily keep a full time staff of two very busy. There is still a great deal of work to get done on fencing and construction and April would be full just getting that done and continuing our riding program.

In short, the timing is not perfect for either of these projects. But I do not have time to be perfect. Today Holland will carry me 50 miles in unpleasant conditions to demonstrate how tough these horses are. In April, Edward the wild stallion, will be trained to saddle with the assistance of a handful of children to demonstrate how gentle and teachable these horses are.

For those hundreds of thousands of people there is only a small, but powerful, handful of people that would actively work to end over 500 hundred years of wild and free herds of Colonial Spanish mustangs living on the Outer Banks.

But there is no one for the wild stallion of Corolla pictured above. About a year after this picture was taken he was killed by a shotgun blast from only a few feet away. No one was ever convicted in his death.

So Holland will blaze long trails and Edward will teach little children and, for those two horses, someone will always be there.

Time to go saddle up. It is pitch black outside and the wind is howling.

Looking for a reason to be optimistic about the future of the wild horses of Corolla? Consider the fact that the small handful of people who would love to see the Corollas erased are all still in bed right now.
Posted by Steve Edwards