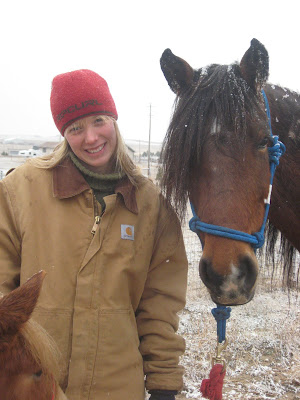 my aged body. In fact it is too cold for me to even write about what the kids and our horses just took me through so I am now turning this key board over to Lydia and Emily so that they can do so.

Hi! This is Emily and Lydia is in the chair next to me... We have just gotten back from one of the coldest rides in the history of Mill Swamp according to Lydia, according to me one of the funnest. But I have a hard time rating the rides out here because I always have such a wonderful time.

At the moment we are "snowed in", Virginia-style, with big plans for avoiding cabin-fever. We sort of knew the storm was coming, so we brought our snow gear and stayed at Steve's house last night so that we could be snowed in here rather than in Portsmouth.

This morning after breakfast, Lydia showed up ready to go feed-up horses in some very uncool looking ski pants (Lydia says that "uncool" isn't a good word and to say "spiffy" instead) that Steve said made her look skinny. I thought this was hilarious because Lydia is skinny as a rail anyway. They saved her from the troubles of wet pants all day, she says. She wants to thank her mother for convincing her to bring them because she was hot when Steve and I were frozen.

After admiring Lydia's choice in fashion, we drove out to the horse lot in Steve's little SUV to feed and water everybody. I love how horses look in snow, especially when they run. It's like no other sight on earth. We got to wondering how deep the snow was in the woods, so we each grapped a horse and headed out to see. It was about 6 inches deep, for the record. The horses were very sure-footed and seemed to remember every inch of the trail even though they couldn't see it.

When we got back, we were starving. Beth very wonderfully had hot soup ready for us. Hot food is amazing after getting wet and frozen.

Ater lunch, Steve took a nap on the couch for three hours while we watched a movie--this enabled him (at his advanced age and all) to be able to go on a snowy night ride with us after a delicous dinner. We rode on and on in the darkness, talking and laughing and generally having a great time. When my feet were sufficiently frozen, I suggested that we turn around and head home. Steve looked over at me and crowed that he had "beat a Marble", then kept talking as he turned Holland around. I'm a sore looser, so instead of turning around, I got my horse into a canter in the opposite direction. Lydia thought that was a good idea and came, too. It took Steve a minute to figure out that he was talking to his horse instead of to us...
Posted by Steve Edwards

Aww I'm so jealous! And I thought of you guys more than once while I spent most of the day inside....with cabin fever...Lydia - tell me you remembered your camera!

Cool Beans!
I tried to convince Lisa that she needed to "season" her new truck and take a ride out...she wouldn't agree
Enjoy the beauty

sorry rebecca, all cameras avalible were out of batteries and this was not figured out until we were snowed in.
bboooohhoooooa
i can't forgive myself.
-Lydia

Steve and his "advanced age"... bahahaha I like that.