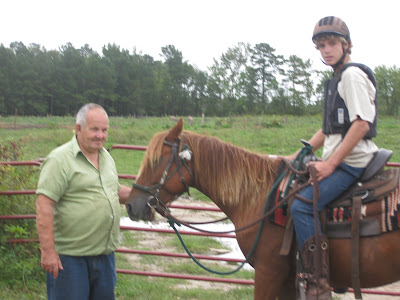 Harley is five. Jacob is fourteen. Daddy is seventy four. Some of the trees in the background are older than Daddy but most are not. Daddy has lived his entire life within a 20 mile radius of the horse lot. Poppa, my great grandfather, broke wild western mustangs (then called Texas Broncs) at a farm about 2.5 miles from the horse lot. That was about 100 years ago. My white first ancestors came to this part of Virginia in 1635. I cannot imagine that since that time there has been a moment when I did not at least have one ancestor living within a twenty mile radius of the horse lot.

Now, as I said, Harley is only five. He came out of Tom Norush's breeding program which for years focused on crossing western Spanish mustangs with those descended from the Spanish mustangs of the Outer Banks of North Carolina. Harley's eastern ancestors likely came to the Outer Banks in the 1500's and by 1720 Spanish mustangs would have been found among the English settlers here in Isle of Wight. Not too much of a stretch to imagine that he might have had relatives among those horses.

The Corollas have roots in the southeast that go back nearly 100 years before Jamestown. Our generation has no right to be the one that allows the extinction of these amazing little horses.
Posted by Steve Edwards