Be Patient, Conservation Help Can Come From Unanticipated Sources 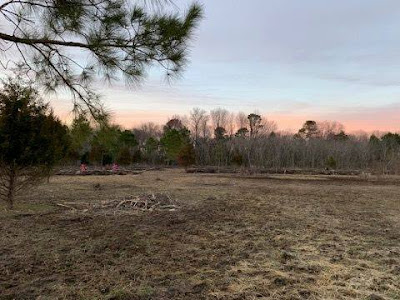 We work hard to conserve and promote nearly extinct strains of Colonial Spanish horses along with several other Heritage livestock breeds. We work even harder to promote soil and water conservation. This is a winter picture of a portion of a pasture created from acres of brush, trees, and brambles. Thousands of small trees were removed by hand--no heavy equipment to scar and compact the soil. Trees were converted into fences and  brush piles for wild life. No chemical herbicides, fertilizers or pesticides are applied to the land. The soil is being rebuilt by multi species grazing and microbial farming techniques.

One never knows where help will be coming from and that is one of the reasons to never give up on a project worth doing. Wendell purchased a brush buster and walked behind it for countless hours in the early stages of converting the land to usable pasture.  Scouts and volunteers from Dominion  Power helped clear land. A grant from the Livestock Conservancy has allowed us to divide the parcel into five paddocks. Jack  dug out another water hole to go along with the larger ones that my brother dug out. Matt tirelessly cut stumps and built brush piles.

When I purchased a chainsaw to begin this project I had no reason to hope for any of the help that we have received from volunteers and outside organizations.

I see a strange parallel going on in the miles of ditches near the horse lot. About a decade ago I saw something in one of the ditches that I had not seen in nearly forty years--a spotted turtle. These endangered turtles cannot live in the kinds of degraded water ways that modern agriculture often produces. Slowly their numbers increased. In the past few years the spotted turtle population has seemed to skyrocket.

Why could that be? I have a pretty strong hunch.

Ground Hogs have all but disappeared. The once booming fox population seems to have leveled off. Dead possums do not litter the roadways in nearly the numbers that they did a score of years ago. Feral cats, once one of the most commonly seen non-rodent mammals in our woods are now seen only a few times a year by those who observe the woods with the most careful of eyes.

The change has been the explosion of coyotes in our region. Coyotes, who mate freely with dogs, and whose offspring with dogs are fertile, hunt in packs here in Tidewater. By hunting in packs instead of singles or pairs they are more efficient predators and the resulting Coy-Dog has brought a big change to our wild life profile.

The spotted turtles have been unforeseen benefactors of this change in predation. Without so many feral cats, raccoons, and possums out there to dig up and consume their eggs their numbers have taken off.

I cannot imagine that any wild life biologist would have expected this outcome, just as I never expected all of the hard work of volunteers and financial contributions that have kept our program growing.

The spotted turtle provides another lesson for us. They have life spans of 60-110 years of age. They are in it for the long haul.

So are we. Working steady--plodding forward--planting seeds and breeding for the future.

Check out this great article on these beautiful turtles.