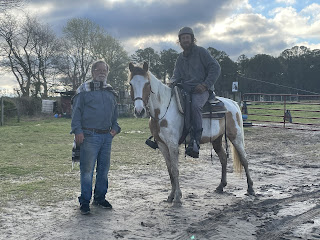 After nearly twenty years of working to prevent the extinction of the rarest strains of distinctly American horses one can notice that a pattern of promotional ideas are floated on social media and tend to show back up in a few years as new preservationists become involved in the effort. I am not going to list these ideas because I do not want to create the impression that I am critical of those who make a well meaning effort to preserve and promote these extraordinary horses.
Many of the efforts share one thing in common. They look to modern breed horse owners as not only the market, but the only hope for the salvation of the first great horses of America. It is hard to "convert" members of the established horse world and expect them to walk away from that which they have been taught since the first time they purchased boots. They have learned too much fiction for me to be able to replace it with fact.
I believe that the hope of these horses is not the current horse owner, but instead is the novice. A novice who dedicates himself hard to learning natural horsemanship for six months will have a much better understanding of the horse's mind than  a  causal horse owner can pick up in six years.
Tim sits astride Manny, a complicated Choctaw horse who was not comfortable with a rider trying to mount up. Tim turned Manny into a great trail horse and rode over a thousand miles in a year.
Not just any year, He rode over 1000 miles his first year of being a rider. He and his wife Samantha have now acquired land and Choctaw horses for their own conservation program.
At the close of the day yesterday we had a youth church group come out for an introduction to riding. How many such young people might end up owning a Colonial Spanish horse at some point in their life because they had the opportunity to be one of only a handful of people in this world who have had the privilege of riding a Colonial Spanish horse? Who knows!
But I do know this. Every child that I put on a Colonial Spanish horse has a chance to be this generation's next Bryant Rickman, Vickie Ives, or Stephanie Hayes.  I also know that whatever potential a child might have to grow up and become a significant preservationist will not happen unless someone teaches that child to ride a Colonial Spanish horse.
Posted by Steve Edwards