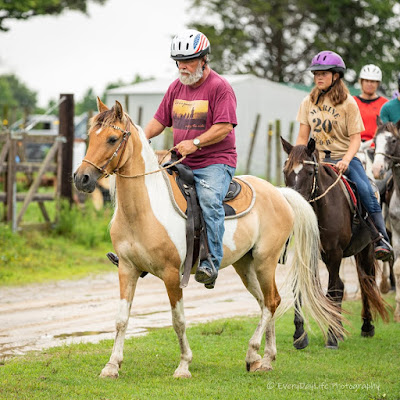 But look how much that small percentage came through!

He is a spectacular horse, one of the best that I have ever ridden. However, he illustrates why we have to be very careful in our breeding in the Corolla offsite breeding program. In order to maintain true Colonial Spanish type no horse outside of that breed is included in our breeding program. There are so few Corollas left that they face genetic collapse if other, non-Corolla, genetics are not carefully introduced into the breeding program. We breed Corollas to a small, select group of strains of Colonial Spanish horses that are historically, genetically, or phenotypcally in line with the Corollas and those offspring are bred back to straight Corollas or Shackelfords.

Among the Chincoteagues one can find some beautiful examples of what a Spanish horse should look like. But those beautiful horses are likely to produce foals that do not carry  any of these Colonial Spanish traits.

I continue to believe that Chincoteagues are the most under rated horses in the nation. It is not that they are not "good" enough to be part of the off site breeding program. It simply is that they include the blood of modern horses.
Posted by Steve Edwards