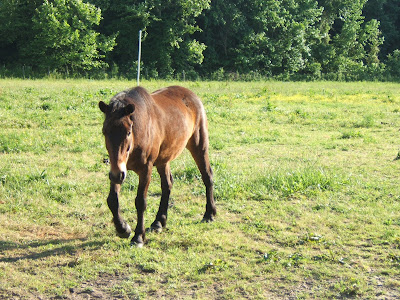 We are about to begin our step by step process to create our replicated homestead circa 1670. We will start on the Smoke house in the next two weeks. First a bit of back ground on what we are building.

This is not intended to be a new Jamestown. Its primary purpose will be to create a unique picture frame around our Corolla preservation program. It will create a visual historical context for the role of the Spanish horses in early Colonial America. The Smoke house will be used. The other structures are for display purposes. This is not intended to be a tourist attraction. This will just be one more thing that makes our program unique.

Here is our framework--We think of the frontier as being somewhere out west, but in 1670 Isle of Wight was on the frontier of the English world. Yes, there were settlements west of here by that time but we were on the edge of the edge when my first white ancestors moved here in 1668. They settled less than 10 miles from the Little house near the store at Pons.

We are not building some silly Gone with the Wind site. Instead we are building something much more representative of American history--the home site of a very small farmer.

Here is a bit about our fictional farmer, Patrick Gwaltney, in 1670. He came over as an indentured servant and worked as a laborer and carpenter's helper for seven years to pay off the cost of his passage. He is 22 years old. He is unmarried. He does not plan to stay that way but must establish himself a bit before he will be able to compete for the still relatively scarce number of eligible women in Virginia. He got on well with his master and when he left he was given a few tools, some goats, a pregnant sow and some hens. He considers the worst thing about being poor the fact that one must walk and that only the wealthy have horses. He adores horses and won a blind mare that was about to have a foal in a drunken card game when he was 20. That old mare, Abigail, has since had two foals. Though he has no money he owns three horses, which is a rare thing for his day.

He is basically honest but takes advantage of "opportunities". One day the over seer at the plantation where he worked got so drunk that he forgot where he placed his gun, powder and shot. Patrick keeps that gun hidden and it is his greatest source of anxiety. He needs the gun that he stole, but if convicted of its theft he will be taken to Jamestown and hung.

He is driven by the simple desire to survive and his primary goal in life is to get more, of everything. He wants to get rich from tobacco. He wants to win money racing his horses and gambling around the large settlements near Jamestown. He does not understand the Puritans that have clustered around the Bennet family down in Nansemond county and even closer at Basse's Choice, only a few miles down the Pagan Creek. He understands the Indians that he trades with even less. These are not Powhatan Indians. Those were driven from Isle of Wight a generation earlier. He follows the swamp west until it reaches the Blackwater River, turns north on the Nottaway and trades with The Nottaway and Meherrins who speak an Iroquois dialect and were enemies of the Powhatan Empire.

His abode is simple--a sleeping rack, more deer skins than cloth, a cooking pot, a root cellar, a loft with a false wall where he hides his gun. The area around his home is littered with oyster and clam shells. Shell fish make up the bulk of his protein consumption. He has a corn crib and a log farrow house to keep bears and wolves from his baby hogs. His brindle plott-bull dog cross that came from the dutch traders is named Mary. He calls her Queen Mary when no one else is around. Her barking is the best hope that the livestock have of surviving the wild cats (cougars) that are still found in the area. Down river some of the gentleman have large plantations, some with over a score of African slaves. Patrick hates slavery but he fears slaves. He does not worry about Indians anymore but were there to be a slave insurrection Queen Mary would not be enough to protect him. He has already planned to ride out fast toward Lawnes town if there was an insurrection but would not use the trade road near his home. He knows a way through the woods that would get him there with out having to get on such a potentially dangerous thorough fare.

We will make him the things that he would have made for himself, wooden spoons, a hide fleshing beam, hide stretching frames, crude baskets, a shallow hand dug well, and whatever else that our research and ingenuity can come up with that would have been historically appropriate for a poor boy living alone on the frontier to have owned.

If you like living history look at this picture of Holland, who was born in the wild on Shackleford Island. His ancestors came to America perhaps as much as 150 years before my ancestors did.

You are part of the generation of Americans that can either preserve these horses or sit by as they go extinct.
Posted by Steve Edwards

SOUNDS GREAT STEVE, LOOK FORWARD TO SEEING IT ALL COME TOGETHER, lOIS gWALTNEY

Very interesting fictional character. Though history buffs tend to know about indentured servants, few realize the scope, role and significance of indentured servatude to America's colonial economy. Over half of white people who immigrated to America in the first few centuries were indentured servants, essentially slaves in every way except that there was (theoretically) an end in sight, if they could survive their term of service.

They were property to be bought, traded and sold, left to heirs in wills, and abused with impunity. It is common to note the irony that the Founding Fathers wrote about the self-evidence of Rights of Man and of human equality, while at the same time owning African slaves -- what many do not realize is that the Founding Fathers, like all wealthy colonialists, also owned white slaves, for whom living conditions could be harsh, too. About a third of all white indentured servants died in service, and never saw the promised freedom they gambled their lives to achieve. (This is not meant to downplay the horror of the African slave trade, just to show that wealth does not care who it exploits.)

And yet, from the beginning of our nation's founding, racial bigotry has made poor whites identify with their white masters, rather than with the other exploited people of their era. To borrow an analogy you made in another excellent post, wherein you compared mustang owners who consider their own beasts to be superior to the "house slaves" who despise the "field slaves," poor whites in Colonial America were themselves of that same mentality. Sad to say, it is a mentality that continues in many parts of our country to this day, and continues to inspire poor whites to vote Republican, a party that exists for the sole purpose of further enriching the one percent.

(Sorry to get political, but you are the one who once said your mustangs are Democrats!)

Great work, Steve. I enjoy following your dream and its progress.