Done Come Home To A Place They Never Been Before 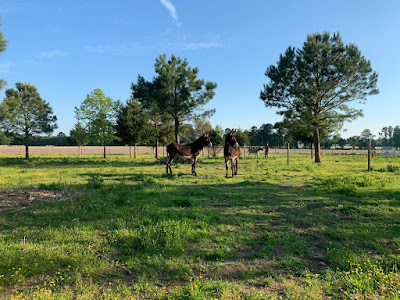 Not to get too esoteric and reflective, but it is good to remind ourselves that not everyone, in every age, in every culture shares our most deeply embedded western concepts. For example, not every culture in history has seen time as linear. To take that to its starkest implications, in those cultural settings there is no belief that yesterday came before today and that tomorrow will come after today. In cultures that viewed time as circular instead of linear everything came both before and after everything else. There was no beginning and there will be no end according to such a world view.

If you think about it too hard you can get dizzy.

Yesterday we unloaded the two most beautiful Mammoth jenny donkeys that I have ever seen after a long drive back from Happy Valley Donkey Rescue in Concord Virginia. The Thomas family's love of donkeys has allowed us to preserve and promote this wonderful piece of American history.They are sisters and are of a breed of donkey so rare that few people have any idea that there are donkeys the size of horses.

They are nearly extinct.

That possibility should bother anyone who cares about the agricultural history of this nation. George Washington was among the agricultural pioneers that worked to produce these super sized donkeys.  The tall donkey jacks were bred to  large horse mares. The powerful mules that resulted from the breeding plowed much of the American soil.

When they were unloaded a herd of Spanish goats came over to see what the ruckus was. Right behind the goats came a band of five sheep. Three are of Hog Island lineage. Two of them were directly from Mount Vernon. The other one's parents were from Mount Vernon. The other two are Leicesters, a sheep breed from England that Washington sought out to cross with his American sheep.

We all stood there in a pasture with George Washington's sheep and his donkeys. For a moment, for just a moment, "was", "is", and "will be" were all happening at the very same time.

And for me that is the value that one receives from making the conservation of heritage livestock a top priority in one's life. It is a life enriching experience to simply stand in a pasture watching history unfold, refold itself and then unfold again.

And I love doing this. And this is what makes it worth it.

Heritage Breeds Week begins in two days. If you would like to become part of working to conserve the livestock that built our nation go check out the wonderful work that the Livestock Conservancy does. If you would like to participate in the  breeding and conservation of nearly extinct Colonial Spanish Horses you can contact me as msindianhorses@aol.com
Posted by Steve Edwards