Colonial Spanish Horses: Do You Really Think They Are Super Horses? 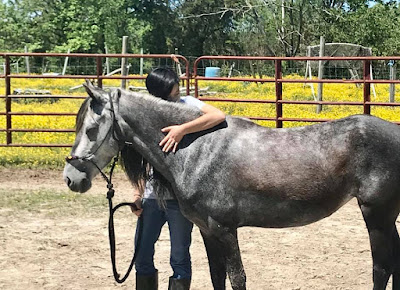 My strong preferences would be to not hold such a belief. Feeling that way makes me sound too much like an overly eager booster. However, pesky facts and observations keep getting in my way. A Corolla mare, less than a month after being removed from the wild carrying her rider on a forty six mile ride--A Corolla mare never before ridden responding to the lightest pressure while being ridden in a rope halter as if she had been doing so all of her life--Choctaws and a Shackleford taking three of the top ten spots in the first endurance ride that their riders had ever seen--Tradewind a wild stallion from the Outer Banks removed from the wild because of severe founder and hoof abscesses responded so well to therapeutic hoof care that he went on to become the Horse of the Americas National Pleasure Trail Horse of 2010--The list of the accomplishments of these historic horses is beyond the imagination of those who have never had an opportunity to ride them--

And now this--Bella Note, perhaps the last Colonial Spanish mare alive to have 12.5%  Grand Canyon lineage, eagerly takes to swamp trails including water and mud that was chest deep and then settles into a 17 mph trot with Tam gleefully sitting on the saddle. After she is fully conditioned she will become one of the lead horses in our endurance team.

And this was on her first limited "test run".

There size scares off modern breed enthusiasts--until they ride one.

Super horses? Clarke Kent didn't look like he could fly either.
Posted by Steve Edwards

Would love to hear more about how the horses are doing in endurance. I would love to have one of these horses but live in Kansas so its a bit of a drive.

I remember the bias years ago when I was involved with horses - size wise. My horse was 15-2 & he was considered small!! Imagine the shock at a 13 or 14 hand horse being ridden by an adult!!
What you have done for these native breeds is wonderful & needs to have more publicity. And yeah, I am aware of the many biases against anything that doesnt meet with the current horse world's "blessings"!
Keep up the good work.
Maggie