Why Are Your Wild Horses So Gentle 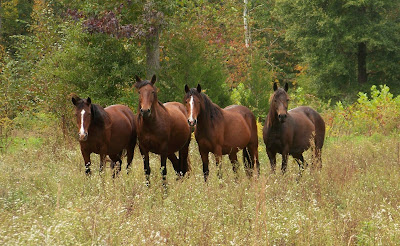 Perhaps to best understand one should simply slowly walk across a pasture of modern milk goats. Chances are they will fall in and follow you around even if you are a complete stranger. They do so instinctively because it is a behavior that they are genetically programmed to do. Over thousands of years the goats that did not have a drive to follow human direction followed their wonder lust and ambled away from the flock. They took their hobo genes with them, leaving those who were driven to follow human direction to reproduce their genes in the domestic flock. After a few centuries, following human direction for these domestic goats became as natural as grazing.

Prey animal behavior, as demonstrated in herd animals, requires that the animal at least be sociable enough to learn how to read the signals of other herd members that could save its life in the event of a predator attack. Psychos, and obnoxious, anti-social jerks did not fit well in the herd's social structure and over the years their behavior lead to disproportionate incidences of isolation or early death through predation. Sociable animals who work to fit in and bond with each other lead longer lives, produced more off spring and passed on that genetic need to bond.

Owners of Spanish Mustang Registry horses, most of which are several generations from the wild often point to their horse's strong desire to attach themselves to humans as a special feature of the SMR horse. It is not. It is more pronounced in the SMR horse because, though he was not born in the wild, his genetics were shaped much more by the years in the wilderness that his ancestors spent than they are by the relatively few minutes his ancestors have spent in the domestication.

In fact, after one properly gentles a horse that was raised in the wild, be they BLM, Chincoteague, Corolla, Shackleford, or any other long term feral herd, one will find that that horse has a much stronger need for human contact and affection than do most modern horses.

The catch is that too few people know how to properly tame and gentle wild horses. When more people get to see the end result perhaps more people will be willing to accept the challenge of becoming a true horseman.
Posted by Steve Edwards

Horse Whisperer..there is a term that I am not very fond of, it is a term ascribed to those in times past who for the sake of preserving their own livelihoods kept the "secrets" of horsemanship to themselves. Many were fraudulent charlatans, quite a few were truly good horseman.
Never before in the history of horse and man has good information, opportunities to learn how a horse ticks, been so available to so many. The trick is in getting the wheat separated from the chaff. In that light..not much has changed.
Folks, this is not hard. It is not magic, there is no "Mystical Horseman's Word")There are no shortcuts.
One..you cannot fear the horse..aand it is most natural for random person off the street to fear him..after all, 600-1600 lb animal can squish you like a bug, but he is not going to...doesn't want to. The first thing a horse has to know is that the human is not afraid of him. If you are not afraid, he is less likely to be unafraid. That is a direct reflection of the herd flight instinct...the horse feeds, instantly off the fear in the other horses..."predator coming, run!" Off they go. The human must master the emotion of fear for the sake of the horse. This is the first foundation block of horsemanship.
The second foundation stone is that the human must learn to make the horse feel secure...horses do not like excitement...a roller coaster is not in his weekend plan, he would much rather stand around grazing and swatting flies with his buddies. If you are calm and relaxed, confident in what you do, and you show that horse that you will not hurt him, he will begin to trust you, and when horses fully learn to trust, they do so with all their being.
Third stone..there are no shortcuts. None. I don't care what any big name DVD selling horse trainer..I don't care what anyone tells you..There are NO shortcuts. Put it this way..Would you expect a human baby to learn how to walk in one day? Would you expect that same child to learn tensor calculus the next? Of course not..that is stupid. Why would one expect a horse to be any different? The horse must be given time to absorb everything, and some are quicker than others.
Now, you can buy a turnkey horse..gentled trained and ready to ride..but if you are not gentled, trained and ready to ride, he will not be for long. The real added bonus to training your horse is that bond between human and horse that gets built in the long process of training and growing together. What is more important here? Is it the trainer having a bond with your horse, or YOU having a bond with your horse? (No, I will not train your horse for you..Yes, I will help you learn to train your horse.)
Our kids learn these things early, and they build on it regularly, it becomes a part of who we are, and this, aside from the gentle, healing natures of our horses is where horsemanship improves us as people.
"I am not afraid of you."
"I will not hurt you."
"I will take all the time you need to get to where we need to be.
Take those three things and mentally apply them to situations in your daily life..it works both ways.
This is not to say that this is the sum total of horsemanship, it is not. There are many thousands of techniques, tricks, ideas and ways to teach any given thing..The horseman must first THINK, study, talk to others..then teach the horse, and there is no pat recipe for any given horse.
All this is helped enormously by starting with a gentle, easily teachable, intelligent, calm horse.
I think by now, you will realize that the Spanish Colonial Horse is the one I would recommend.
Now here is where this all ties in to the gentle natures of our horses..You can believe what we tell you, or you can come and be with them, apply those foundation stones, learn what makes that big fuzzy critter tick, and know right down in your soul that you have found a friend for life, one who will never lie to you, one you can trust absolutely..how many people would like such a friend? -Lloyd