I'd Swim the Seas For To Ease Your Pain 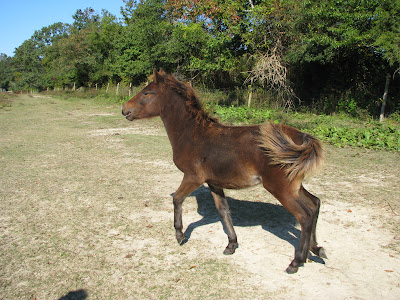 In the great documentary "Buck" it is pointed out that those who are able to communicate best with horses are often "tortured souls." Many of the best trainers suffered horrific childhoods of abuse and incessant trauma. It is no mystery why this is true.

The body language of humans is that of the predator. That does not mean that humans move like blood thirsty beasts. It simply means that all predatory species use many of the same signals, even when not engaged in hunting. The body language of a high school cheer leader and a Jack Russel terrier is indistinguishable.

For such a person, a round pen is a place of peace, a refuge from a world that still constantly signals to his subconscious that it wants to do him harm. In the round pen he can find comfort by providing peace to a terrified colt. It may be the only place on earth where he finds such peace.

I did not suffer an abusive life, but my parents had over 100 foster children while I was at home. The vast majority of them had been abused and lived lives that were waking nightmares. I was always the oldest child. Often one or both of my parents worked night shifts. I had a much larger role in caring for the little ones than occurred in the average family. Without having any idea that it was happening,or even knowing what it was, I began to become fluent in prey animal body language.

For over a decade I have prosecuted all of the molestation cases and crimes against children and mentally retarded adults in the localities in which I have prosecuted. I have given formal training to other prosecutors on how to use correct body language to gain the trust and respect of a terrified child. (Yes, it is exactly what I use in the round pen with a terrified horse--advance and retreat, avoid eye contact, standing shoulder to shoulder, slow breathing, never walking in a straight line, etc)

I am constantly amazed that my riders are so often surprised by what their horses do. How could you not know that he was going to turn to the left and go around that tree? He had been telling you with his body that that was what he wanted to do for at least four steps and asking if it would be ok to do so for another two steps. Even very experienced riders seem to have deaf eyes. My eyes hear everything that the horse tells me.

It flows both ways. I have come to realize that I incorporate much of a horse's world view in my own. I get nervous and a bit edgy when the wind is blowing, even a fairly gentle breeze. I much prefer boredom to excitement. I even find myself chewing softly when I find the perfect word to put in a sentence. Few things make me mad as quickly as having people not get out of my way when I am walking into a crowd. The only thing worse for me than being alone is to be in a herd of strangers.

I have not sought to adopt these characteristics. I have simply recognized their existence. The ironic truth is that, although I am a prosecutor and try many cases every week, I actually spend more time each week communicating with horses than I do communicating with people.

This is a great piece, extremely insightful, much to chew on... thank you.