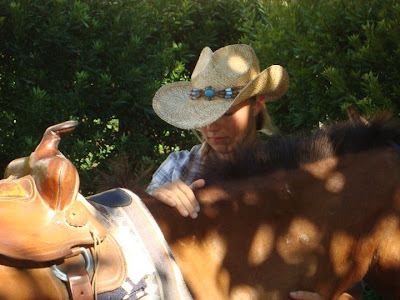 My little riders spend entirely too much time talking about and thinking about getting thrown. As much as I stress to them that getting tossed is rarely a big deal and that on every single football game that I played in for ten years I got hit harder than even a serious tossing entails, they still talk on and on about the time they "got thrown". "Getting thrown" often means falling off of a horse simply because they were riding without focus.

I am just returning from getting thrown off three times in less than five minutes--most that I have been thrown in one training session in many years. Nothing is broken and I do not even see any bruises yet. I will likely be sore when I get up in the morning, but I am often sore in the morning anyway.

As much as I would like for some of the smallest riders to have seen me get tossed, I am afraid that they would have taken away the wrong lesson from the experience. In stead of learning that getting tossed is no big deal they could just as easily "learn" that that horse is a bad horse to be avoided at all costs.

In fact, I would likely still be working the horse this minute but for the fact that I was working her alone. This is not my preference. It is better to have someone there in the event things really go bad. I remember Lido standing outside the round pen as I mounted a few horses that were not pacifists with the phone in his hand having already dialed a "9" and a "1" and waiting only to dial that last "1."

"Ah,Ah,Ah got to be weddy, 'case you need da helicopta take you to da hospidal," he would explain.

I never needed the helicopter and I was never injured so badly that I could not be driven to the rescue squad to meet the ambulance.

Which all brings me back to my orginal point, even when training untrained horses, getting tossed is rarely a big deal.
Posted by Steve Edwards