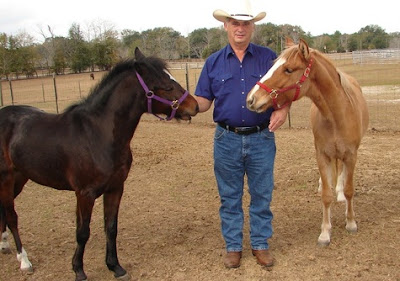 Galicenos of Suwannee Horse Ranch, near Live Oak, Florida, is the focal point of an effort to save a beautiful strain of horses that came up out of Mexico about fifty years ago. Check out their web site and if you can do so go check out their beautiful little horses. Just from pictures one can readily see the Colonial Spanish heritage of these horses. The Galicenos are a very rare strain yet odd chance and circumstance lead us to have one when I was very young.

Around 1966 Mrs. Butler moved to our area from the southwest, Arizona perhaps. She was quite the talk of the area. She had an adopted daughter that was in her late teens and that was it as far as family went. She was related to no one here and how she decided to purchase the farm beside my grand parents is a mystery to me. Everything about her was different. I believe that she is the first person with whom I spoke that appeared to have an accent different than the rest of us. She was different in more significant ways.

She was a rancher. None of us ever called ourselves ranchers. We were farmers. She not only was a rancher, she was a sheep rancher. We did not raise sheep. Very few of us even had beef cows. We raised hogs. She had a mare of a breed that no one around here had ever heard of, a Galiceno. When Mrs. Butler moved she left the mare with us.

Daddy quickly trained her to pull what those of us around here called a buggy, but which I later learned was called by the rest of the world, a sulky. She was a bit skittish to to my eye, but she was also the first mare that I had ever handled. (Momma and Daddy rode stallions. This was in the days before America became sissified about stallions.)

I liked her look and I loved the idea that we had a horse of a breed that no one else had ever heard of.

That little search box on the computer showed me the next Galiceno that I would ever see, nearly 45 years later. I love what I saw. The Galicenos that are being preserved and promoted by this non profit bring to mind the lighter built southwestern type of Colonial Spanish Horse, but they also bring to mind the Mongolian horse of today. John Fusco showed some Mongolian riders a Horse of the Americas publication featuring pictures of some Colonial Spanish horses and the Mongolians immediately recognized the similarity between their horses and ours.

If any Mongolian herdsman find themselves near Live Oak, Florida I suspect that they will wonder who stole their horses and brought them to America.

If I live long enough, and if the Galicenos make it long enough, I will add one to my herd and produce a few stunning little Corollicenos.
Posted by Steve Edwards

The picture of a Galinceno I saw had a face like my Annie's.