What Are We Building Now? 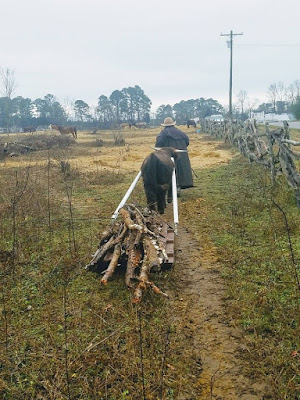 We are building soil and I am loving doing it. Last summer I conditioned horses for an endurance race. There has to be a trade off when that happens. The trade off for me was that I did not have time to clear land and build soil. Things fell behind on pasture development. Pastures became over grazed, compacted and weeds infiltrated the New Land.

The New Land is a nearly twenty acre tract that Beth and I purchased for the use of the program. We cleared about 85% of the trees from land and built a fence of the poles that we cut from those trees. That fence lasted several years and we have nearly completed replacing that will wire fence. Doing so will allow more mixed livestock use of that pasture.

By the end of January I hope to have it very heavily stocked with horses, cattle, sheep and poultry  eating rolled round bales, putting down manure, spreading microbes, and getting the soil ready for plantings of cool season grasses and clovers by the end of February.

Over the last month we have taken on very heavy project in Jacobs Woods, which is about 15 acres of mature pine, maple, many oak pole trees, holly, and a sea of wild blueberry bushes. I am removing all but the largest trees to create both a silvopasture and a brush pile that is going to be about a third of a mile long for wildlife habitat.

If all goes well, on May 1, we will move a mixed herd in to Jacob's woods and will nearly eliminate grazing pressure on the New Land as the cool season grasses come into strong development. And we will be on the road to practicing effective rotational grazing.

But it matters. Not only does it cut our hay bills, it gives us a chance to teach kids how to build soil.