Going Home To A Place He'd Never Been Before 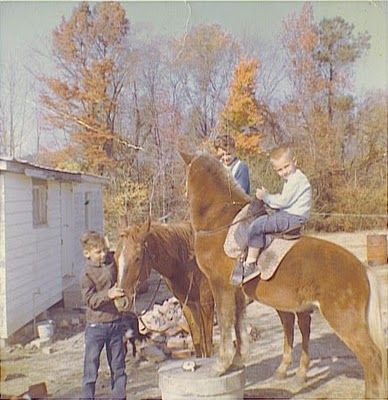 Steven Ambrose, I believe, was the writer who said that Crazy Horse lived a life as free as a man could be--on the prairie, on horse back, without fences, born to whatever station in life yet able to aspire to any station in life.

When one is free in a world that limits that freedom with artificial barriers of title and entitlement one becomes a radical by default.

Respect for others grows from that understanding.

I care everything for actual respect and I care nothing for the language of artificial respect. I have been a lawyer for nearly thirty years and there has never been an occasion in court in which I referred to a judge as "Your Honor." I do not believe that to be an appropriate phrase for one American to use to another American.

When I was about twelve years old I went on a trip with our local county agent.  He was in the National Guard. He had been to college and was an officer. He was also raised on a farm just up the road from me. He told me how much it bothered him that his friends had to salute him when they were on duty. I shared his horror. He was 100% sincere, though I suspect that there were few other officers who shared his revulsion at military courtesy

Daddy worked at a plant that was not in Smithfield for a while when I was little.  The workers, nearly all black, were required to call the supervisors, nearly all white, Mr _______.  The workers wore name tags. One of the workers scratched out her name and replaced it with Mrs.__________.

She was fired for her impertinence. You see, it was viewed as disrespectful for her to ask for the same degree of "respect" that she was required to show the boss man.

I do not like to be called "Mister" nor do I like the term "sir" being applied to me. The parents of many of my riders teach their kids to do so  and, of course, I do not seek to contradict such teachings. But I am acutely  aware that there are scores of people out there who call me Steve who I can absolutely count on.

I would not want to put my life in the hands of anyone who calls me Mr. Edwards.

It seems a bit perverse to me that anyone could consider me arrogant for thinking that everyone else is deserving of the same respect that I am.

And no, that does not mean that I do not believe in manners. I thank everyone who does a kindness to me and I mean it. I expect everyone for whom I do a kindness to thank me and I expect them to mean it.

And to my surprise working with horses has radicalized my feelings on the issue of title and positions. A horse respects me or he does not. He cannot hide his contempt or lack of respect by calling me Mr. Edwards.

Could they talk, each of my horses would call me Steve.

And the person who can become one with the horse needs no artificial indicia of respectability.

Being free is like going home--even if you have never been there before.

(I think that I would have been four years old when this picture was taken of me on my first horse, Tanka, a Welsh/Hackney cross. I got him when I was two and he was one. The following year I rode him in the Christmas parade. )
Posted by Steve Edwards

I have a chest full of colorful ribbons bestowed upon me by the US Navy..a couple of them I am rather proud of..National Defense Service medal particularly. The two "highest ranking" medals I 'won' Navy Achievement medals..one basically for spending thirty minutes on the phone with a nice young reserve recruiter..and the other for watching a bunch of gubmint services civilians screw up a shipyard merger. Some war record.
About all the ribbons ever meant was that I would have to cough up another fifty dollars to update my uniform.
I have yet to find officer, or enlisted, or career politican, elected official or whatever that can put his shoes on both at the same time, as granddaddy would say.

I note elsewhere that there is now a degree program of horsemanship at Sheridan College in Wyoming..Sponsored by one of the few clinicians I really like.
I would love to go and take the course..not so much for the degree conferred, but for the opportunity to learn (and argue with) another methodology.
I strongly suspect that many of our young riders could challenge the course, and indeed, many of them could teach much of it.
The horse does not care about your degree. Not one whit. The horse cares whether or not you honor the deals you make with him. I put this pressure on you, and you move thus..I release that pressure. I take care of you and love you, and you lend me your strength and spirit. That is where respect is born.
Go down to the lower righthand corner of this page and use the search function to look for "Do That Which is Right." Probably the best concept of morality extant. -Lloyd