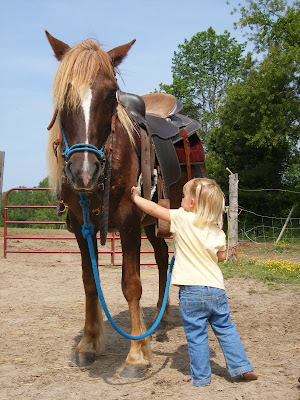 Emily, my niece, was about three in this picture of her and Croatoan, a wild Corolla stallion. At that age she could get a rope and go out in the pasture and bring a horse back to the tack shed. People from town would ask things like, "What if a horse steps on her foot?"

Odds are that if that happened it would hurt. If it hurt enough and happened often enough she would learn to be aware of where her feet and the horse's feet were at all times in order to avoid the problem. Eventually she learned how to carry herself in a manner that causes the horses to respect her and avoid uninvited contact with her body.

She is seven now. Yesterday she was riding her young horse, Spotted Fox, a 3/4 blm, 1/4 Chincoteague of great promise. As we rounded a bend in a field another horse bit him and he kicked out and set in for a bucking. She went off high and she landed hard.

She did not turn the reins loose. Laying on her back she maintained control of her horse. To do otherwise would have been irresponsible. Had she not held on he might have spooked other horses. He might even have gone home, leaving her with a four mile hike back to the tack shed.

Instead, she sniffed a bit, got back on and had a good ride for the rest of the ride. Her conduct pleased me, but it also caused me to reflect that what she did only seems outstanding in today's world. Up until about 1970 her behavior was what was exactly expected of a child her age.

Modern parenting seems perfectly designed to create kids that cannot cope with the problems of every day life. Instead we give them the impression that life is simply a series of choices for them to make so that they can have whatever makes them happy at the moment. I wince when I hear kids asked what they would like to eat instead of being told what is for supper.

Adult life does not give us such a series of free choices constrained only by our whims. Adult life does not ask what we would like to eat. It often tells us what we should not eat. But even such simple decisions as facing the choice between what you should eat to extend your life and what you "like" will yield the wrong choice when one has been raised to believe that one can have what one "likes."

The objective reality is that our modern parenting model is producing an epidemic of Type II diabetes and anxiety disorder. We love our kids so much that for the first time in modern history we are teaching them practices that will give them shorter life spans than we have.

We do a fine job of preparing kids for the good things that come our way. Unfortunately, such things require no preparation. To coin a new phrase "Fun Happens!". Sadly, the modern parenting model also does nothing to create a sense of appreciation and thankfulness for those good things.

The simple reality is that life is, at times, good. But life is also cold, nasty and mean. A child that is taught that it is fine to lay on the ground and whine with utterly no expectation that they will responsibly hold onto their horse so that no one is injured is not given any preparation for life as it actually is.

I did not raise my girls according to the modern parenting model. We had just turned off of the highway when I told Amanda that one of her loved ones had received a discouraging medical report. One tear ran down her left cheek. By the time we reached the first curve on the path she had already begun to develop a plan on what she could do to help out. By the time we reached the tack shed the tear was gone.

I am not a voice crying out in the wilderness on this issue. I know many kids that were not raised with an eye only to keeping them safe, happy, and protected. I know kids that were raised to have faith in God and themselves and to fight back. Rebecca, the Barrs, the Marbles, they were all raised to value other things more than their own temporary comfort.

If today I were to receive terrible medical news (which I will not I am fiercely healthy. This is a hypothetical example)I would go to my wife for comfort, encouragement and a clear assessment of the situation. I have no doubt that I could count on her for anything.

The second person that I might go to could very well be Lydia. She would be a source of strength. She was raised that way.

Lydia is 16 and she has been raised right. She understands that what is best for her is not the deciding factor when choosing a course of action. When Lido died I called Beth and as soon as I got off of the phone with her I called Rebecca, gave her a quick list of instructions and never gave a second thought as to whether I could count on her to get it done. Abby came across the nation to be with us at Momma's funeral. A few year's ago I had a serious health problem with our horses. Emily was in Colorado visiting family for Christmas. She sent a note that she could get a standby flight and be at the tack shed right away if I needed her.

To re-cap, my seven year old niece got bucked off hard and never turned the reins loose. If she had turned loose her spooked horse could have caused problems for other riders.

My sister is raising her right.
Posted by Steve Edwards