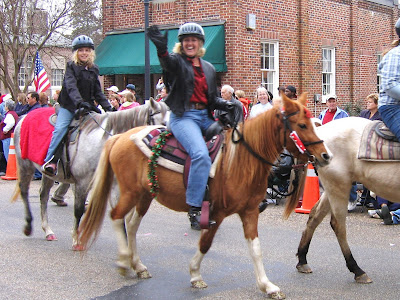 Whether it is helping kids tack up, cleaning the Little House, feeding up when I am gone, hauling horses, picking up hay, or just encouraging other adult riders, since the first day that Terry rode with us she has thrown herself into doing whatever needed doing. She has worked hard keeping her horse, Quien Es?, a BLM/Chincoteague cross that we bred and raised, in the public eye. First with parades, then large area trail rides, and now she is moving into competitive trail riding.

Terry has ridden fifty miles in a day on more than one occasion and she has fallen or been thrown on many occasions. She has hobbled back up, mounted back up and has been a great role model for the little riders.

She was a better role model in a quieter way this past year. Quien Es? developed an ulcer in her eye. The vet promptly recommended surgery to remove the eye. Instead, twice a day for months Terry went out to the horse lot and cared for her horse. She rubbed medication directly into the mares eyeball day after day. She saved her horse's eye. She showed the little riders what horse care actually entails.

My riders are mostly female--little girls to women my age. Of course that means that a significant portion of them would be at each other's throats if given their choice. Terry anticipates fires and works to put out those that flame up. She always has her eye on what is best for the program.

For the last several years Terry has been what is best in the program.
Posted by Steve Edwards