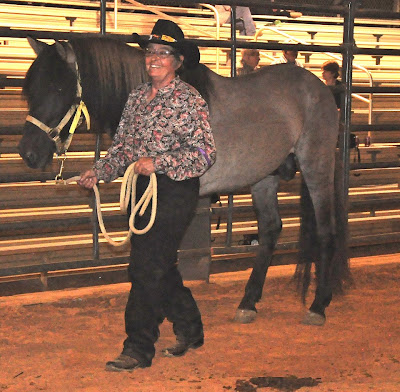 As long as those two words are "Rowdy Yates". One can learn all that is needed to be known about how a Colonial Spanish horse should be put together by simply looking at Vickie Ives super stallion, Rowdy Yates. At the Little House I have a Breyer model horse of Rowdy still in the box. Red Feather has a book and post cards, but Rowdy has a Breyer model. In this picture he is 24 years old and still looks regal.

The Horse of the Americas Registry has a great discussion of breed type on their web site. There is no need to repeat it here, but this photograph bears studying. These horses should not be built like tug boats. They are not put together like a race car engine. The hind quarters should not look like a Dually pickup.

Like Rowdy, they should look like radiators. Every inch of their body serves only two functions--to move forward and to cool off. Rafter hips, slab side, narrow chests--these are not conformation flaws they are the reason that at the end of a fifty mile ride a Colonial Spanish mustang looks back at you and says, "OK, what now?"

Rowdy is still around and standing at Karma Farms. I do not know any strain that, purely as a practical matter, would not be improved by having him on the pedigree. One day I would love to breed one of his daughters to a Corolla stallion. Vickie has a great young Corolla stallion, Sea King, and I expect that she will bring those lines together at some point. The resulting foal will be one that would best be viewed with a camera in one hand and a checkbook in the other.
Posted by Steve Edwards